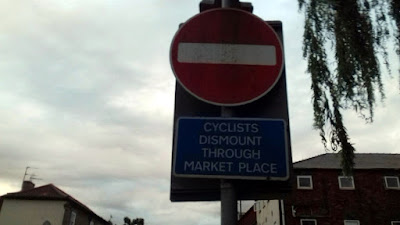 Brigg Blog recently reported plans to introduce new measures to tackle cycling within pedestrian areas like ours, and other offences, by way of fines of up to £1,000.
We did so after Coun Rob Waltham had outlined the proposals at a meeting of Brigg Town Council, held in the Buttercross, which Brigg Blog attended. View details here...
North Lincolnshire Council, of which he is the Leader, has now announced further details (outlined below).
Other 'proposed prohibitions' include: Not carrying the means to pick up dog mess if walking a dog, and not putting household waste in relevant bins.

A comprehensive series of hard-hitting new measures to protect residents and public spaces from anti-social behaviour is to be introduced.
The proposals are designed to rid public spaces of rowdy and unpleasant behaviour so residents feel safe in their communities.
Street drinking, rubbish dumping, off-road biking and cycling in pedestrian areas will all become punishable by fines of up to £1,000.
Cllr Rob Waltham, leader, North Lincolnshire Council, said: “There are many beautiful towns and villages across North Lincolnshire, lovely places where people feel comfortable and safe.
“There are some areas where inconsiderate people behave in ways which we should not tolerate. It might be isolated but the impact is significant and where we can equip the council and partners with new powers we will.
“Anti-social behaviour is a blight on people’s lives and need to know that it will not be tolerated here.”
The proposed new measures form part of a new Public Spaces Protection Order (PSPO) North Lincolnshire Council plans to declare for the whole of the county.
A current PSPO expires in October and is planned to be replaced with an updated order of 19 prohibited activities.
The PSPO will give the police and council enforcement officers further powers to tackle street drinking and drug use, prostitution, drug-dealing, littering, excess noise and other incidents that create nuisance or distress.
The 19 proposed prohibitions include:

The public can have their say on the proposed plans by filling in an online consultation form via https://www.northlincs.gov.uk/your-council/current-consultations-and-surveys/
Cllr John Davison, cabinet member for Scunthorpe, Ashby and Bottesford, said: “We are working closely with partners to ensure people feel safe and well in their own homes and their own communities.
“Where we need to provide further weapons in the armoury we will. We really want to hear from as many people as possible about the new measures we are looking to implement.”
The new proposals will enable the council to work with residents and put areas of most concern at the forefront of its anti-social behaviour policy.
Breaching a PSPO without a reasonable excuse is an offence punishable by a fine of up to £1,000, followed by court proceedings if the fine is not paid.
The consultation will close on 26 September 2021 and people do not need to provide any personal details to take part.
The list of 19 planned prohibitions can be seen by clicking on the survey link...

PICTURED: A sign on the County Bridge in Brigg instructing cyclists to dismount, but many riders ignore it. There are similar prohibition signs where Cross Street meets Wrawby Street, near the turning circle on Cary Lane, and close to where Elwes Street, Bigby Street and the Market Place meet.