BRIGG FAIR FEATURES ON LAST NIGHT OF THE PROMS 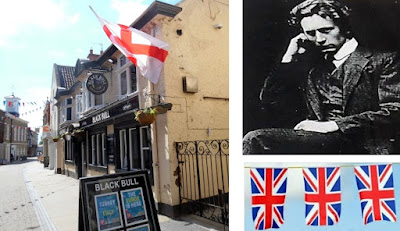 The Black Bull pub in Brigg held an event on Saturday night (September 11) to mark The Last Night of the Proms, taking place at the Royal Albert Hall in London.
Forming part of the Proms concert in the capital broadcast on TV) was Brigg Fair, a traditional folk tune arranged by composer Percy Grainger (pictured) very early in the 20th century.
Percy visited the Brigg area as part of a quest to seek out and preserve old songs for posterity.
He collected the song performed by Joseph Taylor (Saxby-All-Saints) at Brigg Music Festival.
Percy's friend and fellow composer, Frederic Delius, was then inspired to pen Brigg Fair: An English Rhapsody (orchestral).
The folk song's lyrics make reference to a visit to Brigg Fair "on the fifth of August."
That remains the annual date of Brigg Horse Fair (unless August 5 falls on a Sunday).

Someone living down south emailed Brigg Blog yesterday, having found us on the web while searching for information about the Brigg Fair song featured at the Proms on Saturday.
Millions of other TV viewers will have watched the performance, and some will have been wondering about the origins of the fair and perhaps asked themselves: Where's Brigg?