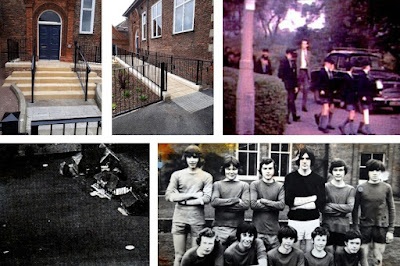 It appears that new additions adjoining the oldest surviving building in Brigg were completed prior to the start of the new academic year at Sir John Nelthorpe School.
Simon Fisher has sent us these recently-taken pictures from Grammar School Road showing the new access added to the front of the grade one listed part of the Upper School. There has also been some planting close to the door leading into the school.
First day at school memories of Brigg Grammar (BGS) come flooding back as a result and also after we observed a bus picking up pupils bound for Caistor Grammar yesterday (Wednesday, September 1) from outside the former Courthouse on Wrawby Street. Someone we know also posted a picture on social media of a family member starting education at the nearby seat of learning a few miles beyond the county's local government border.
We joined many other first years in early September 1967 for day one at Brigg Grammar - a few months after we had all managed to pass the 11-plus examination.
The weather that week was similar to yesterday morning's - cool for late summer.
The boys were ordered to line up in a quadrangle of paved open space (The Quad) between the main school buildings, the outdoor toilet block and the changing rooms which backed onto Grammar School Road.
Names were read out and the new starters marched away to join the A or Alpha classes whose form rooms were in prefabricated buildings (long since removed) which bordered the back gardens of properties on Glebe Road.
The black shoes which boys had to wear on their way to and from school were exchanged for a brown pair to be worn when attending classes.
On day one we recall watching swallows as they assembled on nearby wires ahead of migrating back to warmer climes.
This soon became relevant because when the timetable of lessons for the week was handed out, it showed 'games' the following day.
The early September weather had warmed up slightly as we enjoyed late morning football matches on the school field.
But on returning to the gymnasium, the order was given to remove all football kit and get straight into the nearby swimming pool.
It was still unheated at the time and the sun's rays were relied on to raise the water's temperature - even in September!
Dress codes were important. School caps always had to be worn when in uniform (even in the streets of Brigg or neighbouring villages as far as Keelby and Bishop Norton).
Boarders who lived on the school premises during term time had yellow ties, while everyone else wore blue. Short trousers were mandatory for first year boys only, making them easy to identify.
Some of the senior masters seemed positively ancient to their 11-year-old charges, including Dr Frank 'Toddy' Henthorn, of Westrum Lane, who taught history and was also the Deputy Headmaster.
Those boys still around 54 years later can reflect on the fact that 'Old Toddy' was younger in September 1967 than they are today!
The author of two books about the history of the school, he retired in 1969 - the year when BGS celebrated the 300th anniversary of its foundation by Sir John Nelthorpe.
Sir John's name was given to the new comprehensive school formed by Humberside County Council in 1976 when 'selective' Brigg Grammar was finally phased out.
However, grammar schools, including Caistor (founded in the 1630s), continued in neighbouring Lincolnshire County Council's area.

PICTURED: New additions to the frontage of Sir John Nelthorpe School; first year pupils leaving Brigg Grammar School on their way to speech day at the Corn Exchange in the late 1960s; footballers who joined the school in September 1967 (image courtesy of Kye Brown); part of the school field more than 50 years ago.