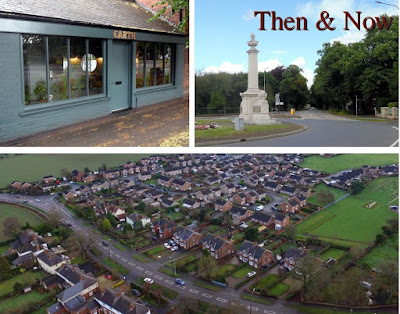 Tree-lined Wrawby Road today still offers an attractive welcome to Brigg for thousands of motorists entering the town on the A18, having retained a flavour of its Victorian appearance, with only gradual changes.

The extensive avenue of tall trees on either side of the road has been a fine feature of the town since the 19th century.
The cemetery, established in 1857, was once run by the Wrawby & Brigg Joint Burial Board to serve both communities, and the distinctive Gothic-style Lodge near the entrance off Wrawby Road still provides residential accommodation with plans to extend it currently being under consideration by North Lincolnshire Council.
There were extensive allotment gardens adjoining still-rural Wrawby Road in the early 20th century, with farmland on the opposite side.
The 1920s and 1930s saw a number of detached and semi-detached properties built by private developers on various plots they acquired. Many front garden trees were planted to fit in with the street scene.
Meanwhile, Brigg Urban District Council created homes to rent on Woodbine Avenue, Central Square and East Parade with access from nearby Wrawby Road.
Brigg Girls' High School relocated in 1937 from the town centre to new premises constructed off Wrawby Road (still in use today as the Sir John Nelthorpe Lower School).
Wrawby Road's agricultural aspect finally ended when Brigg UDC bought Woodbine Farm to create the Recreation Ground. However, even after that opened in 1952, farming was not forgotten as the former farmhouse and adjoining outbuildings formed part of the sale - the groundsman living in the former and the latter being used as changing rooms by sports teams, then for storage by North Lincolnshire Council (including election ballot boxes).
The former farmhouse was demolished in the early 1970s but the outbuildings survived to see in the new millennium before being dismantled; the old bricks were carefully removed with a view to recycling them to repair old properties far and wide.
Post-war, further private housing was built beside and off Wrawby Road, including the cul-de-sac later named Nicolgate Lane (opposite the school). Adjoining Eastfield Road and Glanford Road also had bungalows and houses added at various times.
The southern stretch of Wrawby Road, ending at the Monument roundabout, features many buildings of note, including large detached residences which today host the Beldon House boutique bed & breakfast business and the Orchard Court care home.
Dr Robert Holme's former bungalow was recently granted planning permission to be converted into a new special needs school.
Catchwater Drain once ran off Wrawby Road for a considerable distance but was piped underground long ago. Further information about this will be very welcome.
Near Wrawby Road's junction with Glanford Road stand a couple of surviving single-storey buildings. A stonemason was once based here; today they are occupied by Joanna Leigh Couture and the Earth hairdressing salon.
Health Place, close to where Wrawby Road meets Wrawby Street, is an administrative centre for medical services. This was achieved by converting the former Glanford Hospital (closed in 1991) which had started as the Brigg Infirmary in 1915.
The fact that Wrawby Road is so busy with traffic prompted North Lincolnshire Council to establish one of its first dedicated cycle lanes here - dividing the footpath with markings; one half allocated to bikers and the other to pedestrians. This continues from Health Place as far as the last detached property before fields take over.
The Wrawby end also saw major housing development between the mid-1960s and the late 1970s - entry to the estate being established off Wrawby Road by way of a splayed entrance leading to Churchill Avenue and York Road.
The former was named after war-time Prime Minister Sir Winston following his death in 1965; while PM he made a hush-hush visit to Brigg in 1944.
Located between Brigg and Wrawby, St Helens is a striking detached residence reached by a long sloping drive. It stands on the top of the rise with open farmland behind and views of the Lincolnshire Wolds in the distance.
Mature horse chestnut trees at the bottom of this drive near the lodge were a magnet for conker-collecting Brigg children every autumn in decades past, as were others adjoining the cemetery's entrance. Picking up conkers at the latter involved less walking but its windfall was soon snapped up, pierceds and threaded with strings for playground contests at Glebe Road Primary.
Wrawby Road has had some well-known residents over the past 60 years, including local GPs Dr Ernie Bowler and Dr John Foxton (Mrs Foxton was a magistrate in Brigg) and teachers 'Woody' Watts (long-serving woodwork master at Brigg Grammar) and David Arical (PE at Glanford, Brigg Secondary and the Vale).

The bird's eye view  (above) showing part of the northern section of Wrawby Road was taken by Neil Stapleton. Below we see crowds in 1919 when the Monument war memorial was dedicated - having been funded by Harry Stamp, local businessman and councillor. 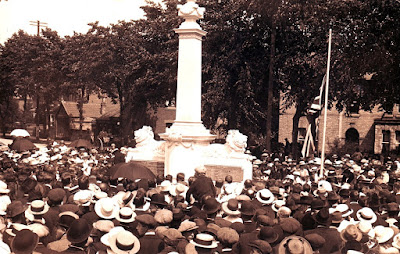 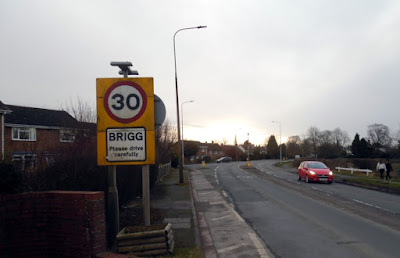 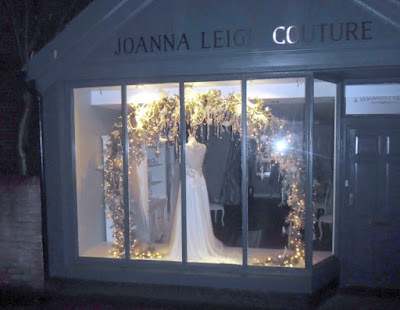