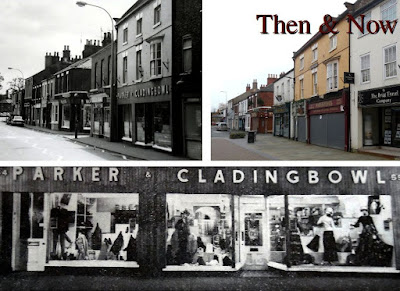 Many retail premises in Brigg town centre today have hosted various a range of business ventures down the decades.
The now-pedestrianised section of Wrawby Street adjoining Cross Street has seen a good many changes since 1971 when the the picture (top right) was taken.
The premises currently occupied by the Brigg Travel Company were a vacant fish and chip shop 50 years ago, Coun Jack Wattam and his wife Florence having run it for a time in the 1960s.
Parker & Cladingbowl - offering drapery, outfitting and soft furnishings - occupied the entire ground floor of Glanford House - today used by Jaylaurs and Pickerings.
P & C, of 54/55 Wrawby Street, could trace its Brigg origins back to the 1930s and sold lingerie, fashions, haberdashery, hosiery, knitwear, made-to-measure curtains and blinds. This was a multi-purpose shop offering personal service, with co-proprietor Walter Parker being a prominent member of Brigg Chamber of Trade.
Also pictured above is Parker & Cladingbowl's frontage as it was in the early 1970s. We know this image will bring back memories for many of our more senior Brigg Blog followers. Manikins were a feature of the shop's displays, though in the current era this term might be frowned upon when we consider that ladies' garments were being showcased.
We think the company may have started out on the other side of Wrawby Street in much smaller premises. Can anyone confirm this?
The shops nearest Cross Street in 1971 were occupied by Richardson's newsagency & home decorating shop (managed by Winnie Cammack) with a sweet shop next door which had various names, including Candies, following the lengthy era of 'Goodie' Binns. Both former shops today are occupied by CuriosiTeas (founded in 2015).

Earlier, these premises had housed Brigg Fruit, Veg & Flowers -  proprietor Byron Teague being the founder chairman of the Brigg Town Business Partnership.
On the corner of Cross Street, Wallhead's outfitters (established in 1897) is just as much a feature of Wrawby Street as it was half a century (and one century) ago, remaining a family concern.
Below we see the Brigg shops run by Richard Wallhead and Byron Teague respectively with patriotic flags flying some years ago. 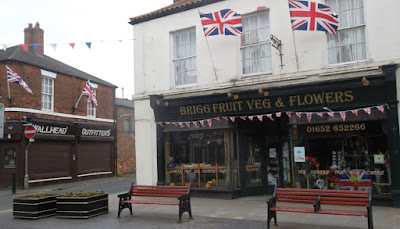