LIDL ON PRICE IN BRIGG - THEN & NOW 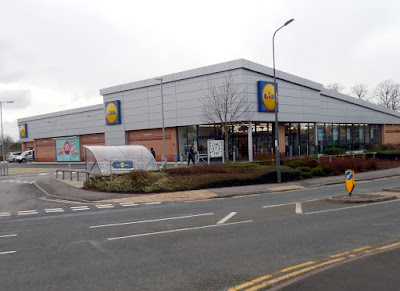 How time flies! It will soon be eight years since Lidl opened its new purpose-built store on Atherton Way, Brigg.
This replaced the earlier one near Springs Parade using premises that had been erected in the early 1980s by Jackson Grandways and are today occupied by B&M.
Fellow discount retailer Aldi opened its Bridge Street store last September, but our latest visit to the local Lidl found plenty of socially-distanced shoppers touring the aisles.

Prices charged by Lidl for the items we bought were similar to what we've paid at Aldi and the walking distance home -  shopping bags in hand - was reduced.
Like many other Brigg residents, we'll continue to use both discount stores. On this occasion we happened to be near Lidl, taking some pictures for other blog posts; if we're on Bridge Street, we might well pop into Aldi.
Lidl's Atherton Way store opened its doors to the public on Thursday, April 4, 2013.
It went on to win Brigg Town Council's Civic Award for that year's best building, having "improved the appearance of the town."
Announcing the award, the authority congratulated Lidl on landscaping alongside the development "which has entirely transformed a previously derelict and unsightly location at the entrance to the town."
The council also recognised the company’s contribution towards the creation of the nearby Brigg Memorial Garden, as well as improvements to the adjacent walkway leading to the river and beneath the Ancholme Way Bridge.
Grandways was Brigg's first 'superstore' when it opened 40 years ago. Some people had misgivings, fearing that it would badly affect the trade of some long-established small shops in the town. However, following careful consideration, borough council permission was granted. Grandways became popular and drew many people into the town from neighbouring villages - some of whom went on to visit local shops.

PICTURED ABOVE: The Lidl store on Atherton Way as it is today; below - the company's original Brigg store in 2011. 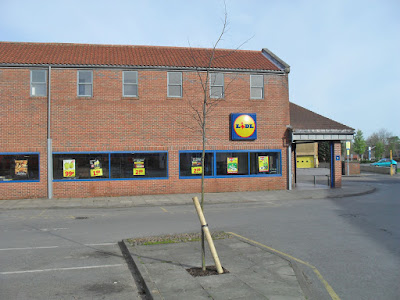