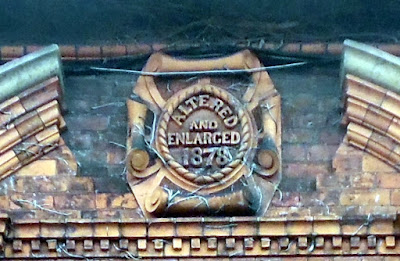 Current proposals to restore an historic entrance to the only grade one listed building in Brigg - and add a new access ramp with railings - set us thinking about what Brigg Grammar School was like in 1878 when this door was installed as part of extensions to the seat of learning which had opened back in 1679/1680.
Full details of the planned scheme for Sir John Nelthorpe School can be viewed here...
The plan will be discussed in the near future by Brigg Town Council, with a final decision being made by North Lincolnshire planners in due course.
Dr Frank Henthorn - Brigg Grammar's history master from the 1930s to the late 1960s and latterly the deputy head - featured the 1878 revamp in his first book about the school. It included the addition of a large boarding house for resident pupils, known as the house.
A survey of the original buildings undertaken by Goddard and Sons, of Lincoln, in January 1878 told the governors they had found walls up to 18 inches thick.
"Goddard noted in 1878 that the walls and main timbers of floors and roofs were sound, after standing for two hundred years," Dr Henthorn's research revealed.
"The contractor for the building of both school and house was Joseph Parker of Brigg; his tender was £977 for the school and £2,344 for the house. He started the alterations to the school in June 1878."
The governors raised the money by "realising capital" which involved selling some land bequeathed to a foundation trust set up by Brigg-born Sir John Nelthorpe in 1669 through his will. Rents helped to fund the school and meet  some of its costs.
Land offered for sale in 1878 included parcels of various sizes in Gainsborough, Horncastle and West Ashby.
Brigg Grammar School closed while building work was undertaken and reopened in January 1879 under a new headmaster,  Richmond Flowers (28), educated at Lincoln College, Oxford, had been senior assistant classical master at Newark Grammar School. His father was the Vicar of Ulceby. Richmond was a talented cricketer, playing for the Brigg club and scoring a stack of runs.
His initial prospectus stated that the new (boarding) house was not yet erected but was expected to be finished in the 'course of the next year.'
After Brigg Grammar was discontinued in 1976, boarding provision continued for some years in the comprehensive era before being phased out due to falling demand.
The Victorian boarding house building was then used for teaching and other purposes - being re-roofed not many years ago.

PICTURED: An inscription above the 'old' door - still present today - informs passers-by on Grammar School Road that the school was altered and enlarged 143 years ago. 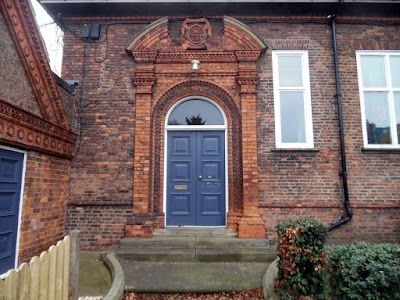