NEW BRIGG STREET NAMES: WHO HAS THE FINAL SAY 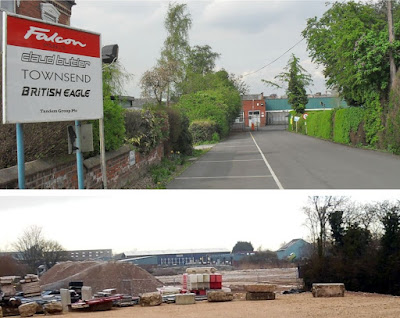 With three new streets to be created in Brigg over the coming months on a housing estate near the A18, the naming process is underway - and Brigg Town Council's forthcoming February meeting may reveal more information about the final recommended choices for these additions.
Keigar is developing more than 60 properties on the former Falcon Cycles and Corah stocking factory sites, off Bridge Street.
The house-builder has suggested Elswick Close, Falcon Way and Coventry Eagle Mews... and consulted our town council about these choices.
The council's alternative suggestions (drawn up at its January meeting) are Elswick-Hopper Close and Corah Mews (plus Falcon Way as already proposed by Keigar).
However, North Lincolnshire Council is the authority which governs street naming - outlining these powers and requirements in a guidance document.
The unitary council says it has the legal responsibility for ensuring that all streets are named and properties are numbered within its area.
"These responsibilities derive from the Public Health Act 1875 and Town Improvement Clauses Act 1847 and they extend to both commercial and domestic property. The Council has the power to approve or reject property addresses proposed by developers or the general public, and to prescribe its own addressing schemes," it explains.
"Names suggested by the developer may be used as long as they comply with the general street naming criteria and there are no objections from the Council and appropriate Ward or Town/Parish Councillors.
"In the event of unresolved disagreement, suggestions go to a member panel hearing."
The council has set out the following requirements:

During Brigg Town Council's January discussions about street naming off Bridge Street, it was suggested that Fred Hopper, who started cycle-making in North Lincolnshire in 1880, should be included, together with Elswick. Fred Hopper established Elswick-Hopper in 1914, having acquired another cycle-making company which took its name from a place in the north-east, not a person.
Fred certainly fits in with North Lincolnshire Council's 'local connection' and 'historic' requirements, but seemingly not with 'names of people, living or deceased'.
North Lincolnshire Council was established in 1996, and its street naming policy document mentioned here was 'revised' in April 2019. It can be viewed in full on the authority's website. Follow this link...
When Brigg-based Glanford Borough Council was on the scene (1974-1996) street naming and numbering was part of its remit. We reported many housing committee meetings in the 1980s when this took place.