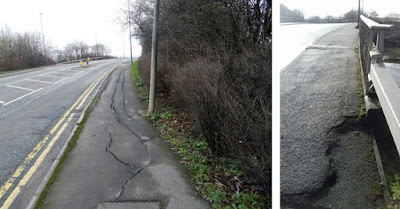 We are confident that these Brigg footpaths are on a list of pending jobs to be attended to in the not too distant future. If not, perhaps someone could be arrange a site visit, as resurfacing and repairs are called for. The cause of the pavement problems is unknown.
We took these pictures yesterday (Thursday, February 4) on either side of the Ancholme Way Bridge which, since the early 1990s, has carried the re-routed A18 around the town centre via Barnard Avenue - making the pedestrianisation scheme possible.
The bridge was built in an era when Humberside was the highway authority; North Lincolnsshire Council took charge in 1996.
Footpaths on both sides of this bridge are much used by pedestrians of all ages, and also by some cyclists who ought really to be pedalling along the A18 (perhaps with exceptions for children and pensioners as this is a very busy road).

The Lidl and Tesco stores are nearby, and not everyone does their shopping by car or uses the riverside 'underpass' to get to/from Lidl. These paths are also used as a 'route to school' by some primary and secondary pupils (in normal times).