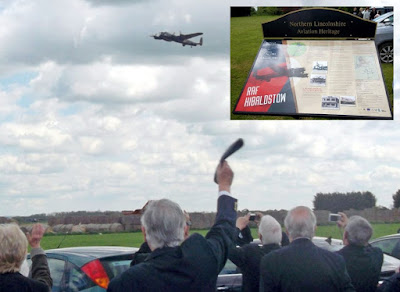 Plans have been announced to create a Second World War RAF Memorial Heritage Centre a few miles from Brigg which will include a dig for victory garden.
Permission is now being sought from North Lincolnshire Council to construct the facility on part of the former RAF airfield at Hibaldstow.
Two wooden huts, a Nissen hut and a brick building are proposed for land to the rear of Field House Farm, Redbourne Road.
North Lincolnshire Aviation Heritage Centre (NLAHC) is the applicant, and council planners will consider the proposals in due course.
The NLAHC (in co-operation with the Airfields of Great Britain Trust) is intending to create a memorial at Hibaldstow to commemorate ALL the airmen and airwomen who served in the Allied Air Forces in North Lincolnshire during WW II.

There were many local airfields, including Elsham, Kirmington, Kirton Lindsey and Caistor.
A supporting statement accompanying the application explains: "The centre is planning on joining up with the Lincolnshire Aviation Heritage Trail - a hugely positive approach from a wider tourism perspective which will help attract people to North Lincolnshire to see its important and rich history, including the critical role of the area in WW2.
"The aim of the Community Group is to mark the tragic loss of those young people who died in the war effort and the contribution of the RAF in North Lincolnshire in WW2 to highlight the ultimate price paid by them with a memorial of
remembrance."
The target date for completion is May 2021 and it is hoped this will attract interest from the local and regional press "and bring home the fact that these crewmen and all RAF personnel who played such a huge part in the WW2 efforts, will be remembered."
The commemorative ceremony is scheduled to take place on May 16 with an RAF presence, MPs, councillors and hopefully sponsors present.
The scheme includes an "orchard and dig for victory garden."
Initially it is hoped to open the site at weekends, with weekday openings for school visits and special events.

PICTURED: A Lancaster bomber fly-past at the former Hibaldstow airfield some years ago, plus an information board on the site.