COULD 'BORIS BIKES' TAKE PEOPLE FROM BRIGG TO SOUTH FERRIBY ALONG THE ANCHOLME PATH? 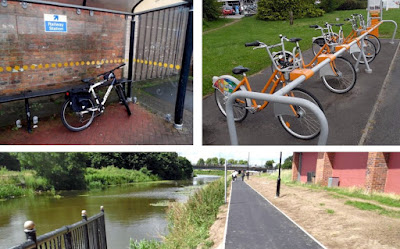 Brigg people who have visited London in the past or our own county capital, Lincoln, may well have seen so-called Boris Bikes lined up ready for use.

Prime Minister Boris Johnson, formerly Mayor of London, who is a keen cyclist, famously made bikes available for public hire as a 'green' initiative to reduce vehicle use in crowded streets. Lincoln and many other cities and  towns, followed suit with their own schemes.
We were reminded of this while passing the bus shelter on Cary Lane, Brigg, the other day.
Beneath a sign installed by the Independent Brigg Line Rail Group to point the way to the town's railway station was the bike pictured above left. It wasn't available for hire but it had been placed there - under cover - by someone.
Our Saturdays-only Brigg passenger train service to Grimsby & Cleethorpes and Retford & Sheffield is currently suspended in Lockdown 3, but buses continue to run, including the Hornsbys No 4 and X4 services.
We were also pleased to see that, despite snow and ice, the so-called shoppers' bus, which tours Brigg estates, was  running yesterday morning (Thursday). It passed us on Yarborough Road on its way to the town centre.
This local service is particularly valuable during bad weather, and Brigg Town Council recently placed money in its budget for 2021/22 to offer support.
Vehicles from the new dial-a-ride bus service, JustGo, are also continue to visit Brigg; indeed, one of them (parked up between journeys) featured in one of our recent posts about the Tesco store.
Behind the bus shelter pictured above is a wall belonging to the former market stalls storage building, whose demolition was granted planning permission by North Lincolnshire Council several years ago but has yet to take place. When not in use, the stalls are now stored in a compound behind the Angel building.
Perhaps when the Coronavirus emergency is over and the Ancholme Valley riverside footpath/cycle way stretches from Brigg all the way to South Ferriby, we will see a rack of 'to hire' Brigg Bikes, rather than Boris Bikes, provided for public use on the brick steps near the County Bridge.

They might prove popular with visiting day-trippers/tourists, particularly during the warmer months of the year, as well as local folk, including family groups. Will North Lincolnshire Council give our suggestion some thought?

Details plans have now been submitted for a new over-55s housing development in Brigg near the A18 - our town being a popular choice for pro... 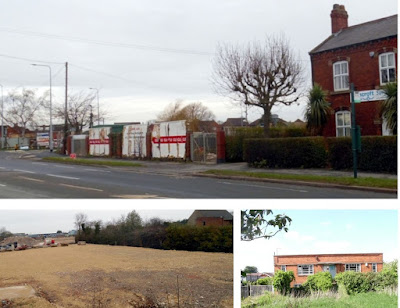