BRIGG FOLK SHOULD SPARE A THOUGHT FOR OUR FARMING INDUSTRY 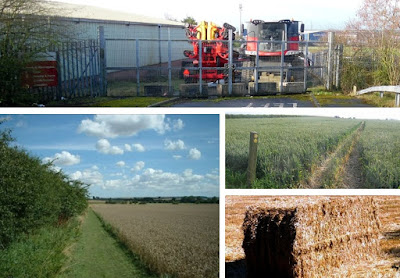 Those working in agriculture and allied trades have received relatively little public thanks in Brigg or elsewhere during the Coronavirus emergency which has been with us since March 2020.
People across the UK, including our area, have demonstrated their support for the National Health Service, care workers, the emergency services, shops, education, food banks and other groups and organisations. All their employyes are very deserving of praise.
However, people involved in farming, who are helping to feed the nation, have received relatively little thanks on social media,  or via the printed press, TV and radio. Where would we be without them?
Yes, a great deal of food is imported but huge tonnages are grown in the UK, and Lincolnshire is one of the major agricultural counties. Our potatoes, peas, cereals and other products are second to none.
One of our pictures above, taken recently from Ancholme Way, shows farm machinery behind Peacock & Binnington's Bridge Street premises - this firm having been founded in 1894. P & B is our most long-established company in this field, though not the only one.
Farmers and their workers harvested various crops last summer and autumn, including grain, sugar beet and spuds, and they are now busy preparing for the next. Cattle, sheep and pigs reared across the county help to supply butchers' shops and supermarkets.
Many Brigg people are now taking their permitted daily exercise by walking into the nearby countryside - something which will increase when the warmer weather arrives. So, next time you are out and about on public paths, spare a thought for the farming community's efforts.
Due to technology and other factors, there are far fewer people 'working the land' today than was once the case.
But Brigg is still ringed by farms, despie losing some historic links with agriculture.
They include the cattle market between Barnard Avenue and Cary Lane (located on land now occupied by Tesco) and Brigg Corn Exchange (built in 1850/1) where grain used to be bought and sold decades ago.
The Potato Marketing Board also established a base in the town and published the weekly prices for locally-traded King Edward, Maris Piper, Pentland Crown and other varieties through the Lincolnshire Times until this local paper closed in 1985 when it had an office at 57 Wrawby Street.
Sadly, Brigg Sugar Factory, built in 1928 to process beet grown over a wide area, closed in the 1990s.
The two-day Lincolnshire Show 2020 - showcasing agriculture across the county - had to be cancelled last summer on the Showground to the north of Lincoln due to the emergency.

This major event attracts thousands of people in normal circumstances, with many Brigg folk and some local companies in attendance.

PICTURED: Farm machinery on Peacock & Binnington's Brigg base, crops growing beside public footpaths linking the town with Wrawby, and a summer harvest scene.