WE TOAST BOWEN'S BREAD - A BRIGG FAVOURITE FONDLY REMEMBERED BY MANY

Bowen's bread is still remembered with fondness by many people who live in Brigg and others who have since moved away.
It's many years since the last loaves were sold at its shop on Wrawby Street and also from its shop/bakehouse on Grammar School Road, near to the junction with Glebe Road. The latter premises have since been converted into a domestic dwelling (see below). 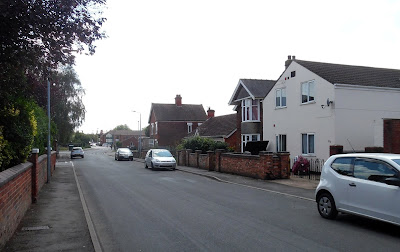 Lengthy queues often formed at the shop/bakehouse on Saturday morning as people waited patiently to collect their bread orders for the weekend.
The counter/serving area was next to the display window containing a range of delicious fresh cream cakes. Impulse buying certainly applied!
Freshly-baked Bowen's bread came in many varieties and forms - milk loaf, granary, cob, plain white, brown, etc.
There was an option to have loaves sliced by a machine, but some families declined and this led to arguments (certainly in our case) about the loaf being cut too thickly with a kitchen knife, resulting in sandwiches dubbed 'doorsteps'.
Slicing was not a problem for youngsters who bought fresh bread snacks to eat on the way to school. The bakehouse made what the kids called Penny Bread Loaves, though inflation rendered this phrase redundant with the passage of time.
Sometimes customers would observe Mr Slater in the shop, taking a brief break from duties at the hot end of the operation or bringing through some more supplies.
Bowen's shop on Grammar School Road also stocked sweets, soft drinks, milk and groceries.
Reporters working on an upper floor of the Lincolnshire Times newspaper office had a fine view of Bowen's shop on the other side of Wrawby Street and observed, through the windows, as customers in cars drew up outside and nipped in to buy bread and cakes (unless the traffic warden was nearby!). That was before the re-routing of the A18 and pedestrianisation removed through traffic.

The montage at the top of this post shows Bowen's, on Wrawby Street, in the 1970s and a current view with Newell's deli/butcher's now occupying the premises. The changing face of Brigg...