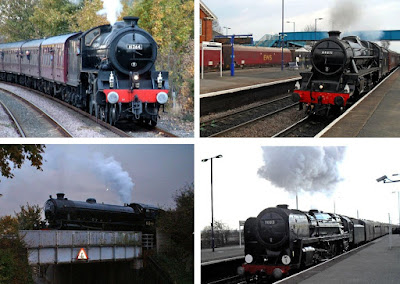 Steam traction is to make a rare re-appearance in the Brigg area - courtesy of heritage transport specialist The Railway Touring Company (RTC).
The excursion from Cleethorpes - hauled by a preserved engine - will pick up passengers in Barnetby around 8am and pass through Wrawby Junction, Elsham and Scunthorpe on its way to Newcastle.
The special train was due to run this year, but due to the Coronavirus emergency it has been re-assigned to Saturday, June 12, 2021.
The return trip will be steam-hauled as far south at York, where a diesel will take over.
Bookings are now being taken. Follow this link for details of how to apply, prices and further information. Or call 01553 661 500.
The preserved engine in charge of The Tynesider will be confirmed much nearer the time.
Many people from the Brigg area have been on previous day trips organised by The Railway Touring Company, which we can recommend, having travelled on them to places far and wide. We expect a good number of local folk to book seats on next June's day trip to the north-east.
British Rail withdrew its last steam locos based in North Lincolnshire back in 1966.
PICTURED: A montage showing some previous steam-hauled RTC tours at Brigg and Barnetby stations, featuring a preserved B1 loco (two views), a Black Five and Oliver Cromwell. The latter survived until the end of mainline steam on British Rail in August 1968.