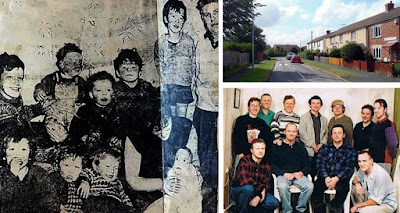 Brigg Blog's recent posts about the 11 Dunderdale brothers growing up on Hawthorn Avenue generated great interest among people of a certain age across the town and beyond. Now more information has come to light - courtesy of a newspaper cutting which appeared in a local weekly during the late 1960s.
A reporter and photographer called at their three-bedroomed council house, and the result was a very interesting feature.
One of the brothers has now shared part of this cutting.
'Eleven good reasons for a council to knock a wall down' was the headline.
The article explained how Brigg Urban District Council, the Dundy family's landlord, had knocked down a party wall so the brothers could take over one of the bedrooms in the property next door, to give them more sleeping space.
This followed the arrival of the 11th and final 'Dundy' just before Christmas - Jeff, still living in Brigg today.
Brigg UDC's housing committee agreed to the back bedroom of adjoining 79 Hawthorn Avenue being re-assigned.
The newspaper report said it was therefore a case of "problem solved" with life following its usual hectic pattern for Brenda Dunderdale - "the mother of the football team family."
Brenda and her husband were the proud parents of two sets of twins and seven other boys, the eldest of whom was then only 12 years old.
Although dad was temporarily between jobs at the time of the article and was better off living on national assistance than being in employment, he was keen to pay his way, rather than "depend on the nation for a living."
The article stressed: "He has applied for several jobs and expects to be in work soon."
To prove his point, Mr D. showed the newspaper some of his wage slips - good money being taken home after deductions.
"Last year was a good year for the Dunderdales," the report noted.

Remembering the neighbour who gave up a bedroom to help Brigg's biggest family...
PICTURED: Members of Brigg's Dunderdale family 'back in the day' with a current view of the house where they lived and the one next door, and a colour picture of the 11 brothers together, taken some years ago.