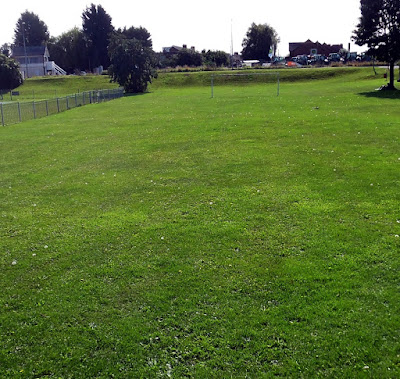 Brigg Blog was very pleased to report the recent installation of a new slide on the Davy Memorial playing field by North Lincolnshire Council, but the start of the new football season has not been greeted by the return of a set of 'missing' goalposts on the same park.
One frame remains but the other, which stood 50 yards away towards Kings Avenue, 'disappeared' many weeks ago.
Kids can still meet up and have a kick-about centred on the surviving goalposts, but they might prefer to pick teams and engage in more energetic and competitive matches requiring a full set.
We made it our goal to find out the reason for one set's removal and also if a replacement is pending.
North Lincolnshire Council now tells us that these goalposts were unsafe.
"After years and years of dogs depositing liquid against the foot of the posts, they had decayed and become a risk," Brigg Blog was informed.
Replacements are being discussed, but the council says it has to purchase them in pairs. Clearly, in his case, only one set is required.
The council may well prefer not to spend cash on two sets when only one is currently required, but equally the authority promotes healthy exercise by people of all ages, including youngsters.

PICTURED: A view of the football pitch at the Davy Memorial playing field, viewed from where the second set of goalposts would normally be.