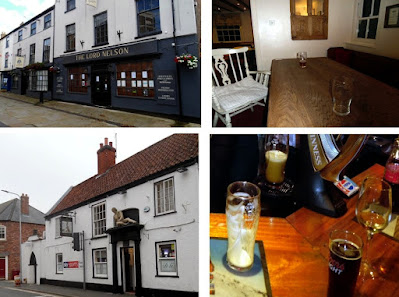 Pubs continue to be a good source of news for those working in the media - Brigg licensed premises included. Although journalists today have the benefit of Facebook, Twitter, Google alerts, email and text messaging for snippets of information, Brigg Blog likes to do things the old-fashioned way whenever possible - a nostalgic throwback to how things were decades ago (we started in 1974).
Popping into the Dying Gladiator on Saturday night (September 5) we met a footballer from Barnetby United. And that was how we discovered the village team had drawn 0-0 with visiting Wyke Wanderers that afternoon in the Barnetby Charity Cup decider at the Silver Street ground.
"Was there a penalty shoot-out?" we inquired. Not in this case; the teams will share the honours over the next 12 months.
Earlier on Saturday night, in the Yarborough Hunt, we met up (by chance) with ex-Brigg cricketers Dale Coy, Paul Taylor and Lee Taylor to discuss the game past and present.

A brief conversation with a Brigg hockey veteran over a 'quick half' in the Lord Nelson on Saturday night reminded us that a new season for this sport is pending. We are now hunting down a fixture list for the men's and ladies' teams, based at Brigg Recreation Ground, which has a 'blue astro' floodlit pitch.
In our playing days, members received a neat fixture card by post, containing all the men's fixtures for the coming campaign. These would pop through the letterbox while the cricket season was nearing its end.
Returning to the present...

Brigg & District Servicemen's Club, on Coney Court, will be re-starting its Sunday night tote this weekend with £100 in the pot for starters.

The Yarborough Hunt will now be opening again on Tuesdays (from today, September 8), 4pm to 8pm.
Andrew Devai's mobile catering business offers snacks to customers calling at the Dying Gladiator at weekends. It's located in the beer garden at the side of the premises.

And finally... Please note you can buy drinks with cash at Brigg bars but some have signs on display saying they prefer card payment, if possible.