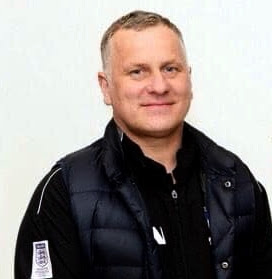 Brigg Town Football Club has appointed a new first team manager.
The signing of Marcus Newell - pictured above - was announced by the club yesterday morning (Saturday, September 5, 2020).
The club said: "Marcus has had success at Cleethorpes Town, winning the NCEL Div 1, NCEL Premier Division and a League Cup double. He took them to Wembley in the final of the FA Vase and their highest every league position in the Evostick South."
The Zebras "with regret" recently parted company with previous first team boss Lee Thompson. The post was then advertised, with September 2 as the closing date.
Brigg Town FC Under-18s will be hosting Emley on Wednesday, September 9 with kick-off at 7pm. Pips Kitchen and the bar will be open.
Picture courtesy of Jim Huxford, Brigg Town FC.
Posted by NIGEL FISHER at Sunday, September 06, 2020