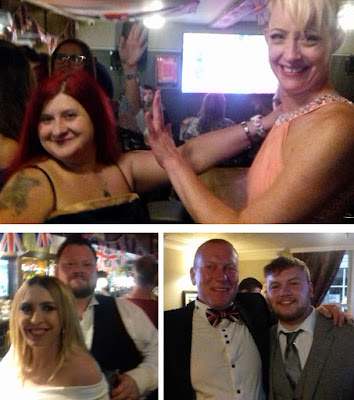 A fundraising night was held on licensed premises in Brigg over the weekend in aid of the Lindsey Lodge Hospice at Scunthorpe which serves a large area of northern Lincolnshire.
The Black Bull, on Wrawby Street, hosted The Last Night of the Proms Charity Gala on Saturday (September 12) in aid of this very worthy cause.
Mine hosts Andy and Tracey Noon presided and £355 was the grand total announced at the end of the evening.
Among those showing their support were Brigg's Gemma Chelton who, as a volunteer model, is The Face of Lindsey Lodge Hospice's online fashion sales; Sarah Hardy, landlady of the Woolpack and chairwoman of the local Pubwatch; and Richard and Jordan Smith, former mine hosts of the Lord Nelson. Prior to that, Richard was also landlord of the Black Bull.
PICTURED ABOVE: Mine hosts Andy and Tracey Noon during the Black Bull's fundraiser; Sarah Hardy with Gemma Chelton (main image); Richard and Jordan Smith.