BRIGG FOOTBALL FANS TO GET INTO THE CHRISTMAS SPIRIT 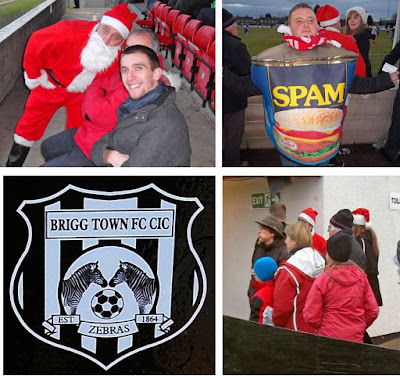 A study of Brigg Town Football Club's newly released fixtures for the 2020/21 season shows there are some interesting clashes ahead in ToolStation Northern Counties East Division One, including a welcome Christmas home game which should draw a good-sized crowd.
On Saturday, December 26 the Zebras will be hosting Skegness Town (3pm kick-off). Perhaps the resort's Jolly Fisherman mascot will pay us a visit as fans get into the Christmas spirit.
Back in December 2011 we were at the Hawthorns to see Town draw 1-1 with Ilkeston when many members of the crowd donned fancy dress, and Santa and 'Spam Man' put in appearances.

Brigg were then in the Evo-Stik First Division South, and Ryan Paczkowski was on the mark before a crowd of 143 - swelled by many visiting supporters.
Brigg Town: Tom Woodhead, Connor Marshall, Matthew Plant, Chris Dickman, Lee-Roy Cochrane, Gregg Archer (captain), Liam Davis, Jordan Cooper, Ryan Paczkowski, David Ricardo, Liam Dickens; subs Joel Shortland, Joseph Clement, John Leonard, Jamal Shahin, Ryan Musselwhite (keeper).
Returning to the current campaign, here are some fixtures local football fans might like to note.
Following their FA Vase home tie against Winterton Rangers this Saturday (September 19) the Zebras' league opener at the EC Surfacing Stadium (Hawthorns) will be played on Wednesday evening, September 23, against Nostell Miners Welfare (7.45pm KO).
Brigg's first Saturday fixture in the league will be on September 26 - away to Harrogate Railway.
October kicks off with two away games on the North Bank that are within decent travelling distance for Brigg fans via the Humber Bridge. Town will be at Hall Road Rangers on October 3 and away to North Ferriby on October 10.
There's a North Lincolnshire derby on November 21 at Winterton, while the home league match against Rangers will be played on March 13.
Brigg Town FC's opening game of 2021 should see a big crowd, as North Ferriby come to Town on Saturday, January 2 (3pm).
The league programme is destined to finish on May 8 with a home game - Brigg v Hallam.
As ever, fixtures may be subject to change. Brigg Blog will keep you posted.
December 26 is not classed by the government as Boxing Day this year, as it falls on a weekend. Therefore, Monday December 28, 2020 is officially known as Boxing Day (substitute day). There are no ToolStation games currently arranged for this bank holiday.

The EC Surfacing Ltd Scunthorpe & District Football League has announced that the Nursing Cup final originally planned for Monday 28th September has been moved to Monday 5th October at The Hawthorns. The Butchers Arms will be playing New Holland Villa (7.30pm kick-off). Spectators can attend.

PICTURED: Fans in fancy dress at the Hawthorns in December 2011.