Brigg Horse Fair has not always been held near Station Road, and for a time from the 1960s through to the 1990s it was located at the stockmarket adjoining Cary Lane, with steeds being shown and paraded nearby as potential buyers and spectators gathered.
The picture above was taken during the early 1970s, close to the fence dividing the stockmarket site from Cary Lane.
This well-known street has an interesting history and has seen a host of changes.
Most of the courtyards which housed the bulk of Brigg's population in the 19th century have some resemblance today to how they looked in Queen Victoria's reign.
However, Cary Lane is an exception, apart from the short stretch which connects with the Market Place. 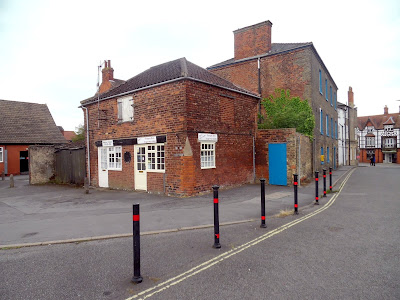 Cary Lane once contained cottages - swept away long ago - and had gardens and orchards located towards what's now Barnard Avenue.
But all that remains today of the old lane is the tall building used by the Freemasons, the one nearby housing the Pop-In Centre and a taxi company office, and a few single-storey former outbuildings behind 7 Market Place (pictured immediately below). 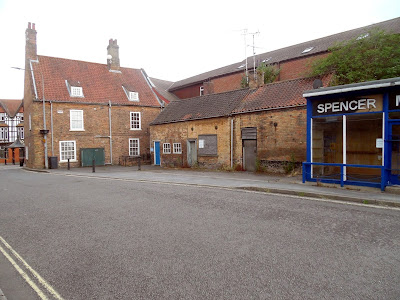 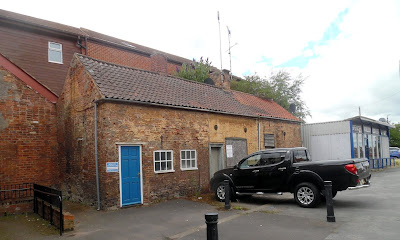 The former market stalls storage building, next to the public conveniences, is thought to be an early 20th century addition, which explains why planning permission was granted a few years ago for its demolition - despite being located on the edge of the Conservation Area.


Cary Lane was once much wider where it meets the Market Place. However, the early 1950s saw 8 Market Place removed to make things easier for vehicles leaving and joining the A18, which still ran through the town centre. 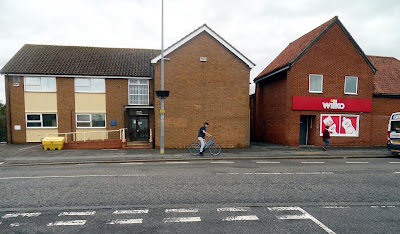 Today's Cary Lane is very familiar to shoppers because of the bus station (a term not often used today) and the presence of the Wilko store - housed in premises purpose-built for Kwik Save in the 1980s. 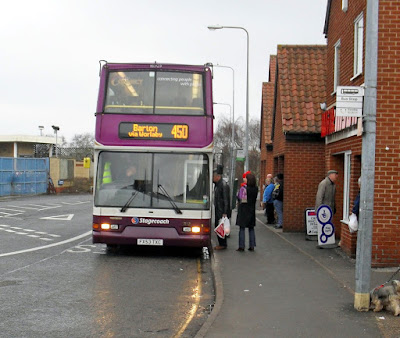 Tesco, which established its Barnard Avenue store in the late 1990s, created a goods delivery facility with lorry access from Cary Lane.
Still a key feature of the national retailer's store today, the solidly-gated yard is opposite the former Brigg Town Hall - built by the Urban District Council circa 1970 when it outgrew cramped facilities at the Buttercross.
This Cary Lane building is now used as offices by Humberside Police.
Nearby, for many years, were portable buildings occupied by Glanford Borough Council's planning department.
Since their removal, the land has provided car parking - initially for the public (unofficially) and latterly for police staff.
Nearby there was once a bowling green whose wooden pavilion was moved across town to the Recreation Ground in the 1970s to provide extra changing accommodation. It overlooked the cricket pitch.
Tesco's store was erected on the site of the former Stockmarket built by Brigg UDC in the early 1960s. Some of its buildings faced Cary Lane. The stockmarket, with its auction ring for cattle, pigs and sheep, only lasted into the 1990s. It was hardly a white elephant, but was the considerable expense of its construction ever recouped?
Brigg Charity Market stalls were erected on Cary Lane for a time - helping local groups to raise funds.
Back then, Cary Lane was still a through road, but pedestrianisation in the 1990s resulted in major changes.
A short stretch of the lane was included in the new traffic-free zone, but access was retained for delivery vehicles, market traders and the emergency services. This was well-meant but some motorists, without good cause, continue to ignore the no entry sign on Cary Lane while visiting shops and cash machines.
Just within the pedestrian area, the former Spencer Molloy electrical goods showroom on Cary Lane has now been empty for many months.
Two wooden retail lock-ups used to stand nearby, but were demolished some years ago.
Cary Lane did not start out with that name. Almost 200 years ago it was known as Nicholsons Lane, and by the mid-19th century Hetts Lane was used (Messrs Nicholson and Hett being local lawyers).
Renaming to Carey Lane was undertaken by the Local (government) Board in 1869.
Surviving documents show that the 'e' was still used well into the 20th century.
Exactly when, and why, the spelling was altered to Cary Lane is unclear. But it happened long before our current councils came on the scene.
Carey Elwes - a member of the well-known local land and property-owning family - was a local Lord of the Manor during the latter half of the 19th century.
However, Gervase Henry Cary-Elwes was a famous singer who performed at home and abroad in the early 20th century.
So a valid case can be made for today's Cary and the formerly-used Carey.