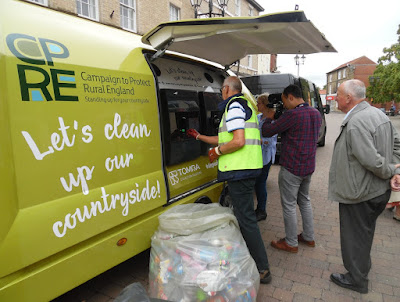 An officer of the Campaign to Protect Rural England (CPRE) has thanked Brigg for valued support.
Maddy Haughton-Boakes, campaigns officer - litter programme, said: "We are so grateful to the Woodbine Estate Litter Picking Group for their Green Clean event.
"I’m sure they’ll agree the day was a big success with 9 bags of litter collected in just an hour, including over 350 drinks containers.
"The group’s extra efforts spent sorting and recording the quantity of the drinks containers by size and material will go towards data that CPRE are gathering throughout the Green Clean and will later share with the Government, via its upcoming deposit return consultation, to make sure England gets the best-designed system.
"We’d also like to thank the residents of Brigg for coming out to see and greet our travelling reverse vending machine. Their questions and excitement about the machine were a great way to kick off our tour of England.
"We hope that this partnership between local action and national campaigning can continue and invite the Woodbine Estate group and other people committed to litter picking to keep this dialogue open with us by letting us know any littering patterns you notice or frequency of certain littered materials.
"Furthermore if anyone is interested in continuing to hear about our litter campaigning then please do sign up to CPRE’s campaigns network via this link: https://bit.ly/2M9grWG "

N.F ADDS: As a result of this campaign, a certain householder and journalist from Brigg had his "two seconds of fame" - being featured in footage shown by the BBC's Look North while feeding cans into the reverse vending machine that visited the Market Place, courtesy of the CPRE. We missed this "appearance" but clearly many people didn't and  mentioned it  in the days that followed. Pictured above - the machine's visit to Brigg town centre.

This is an excellent idea...it goes back to the days of us youngster taking pop bottles back to the chippies to get their deposit back.
But how does the system work on the Continemt?
For example, are all the cans/bottles going thro' the recycling system go into the machine and folks get tokens?
We have those large recycling bins and each household has one of those plastic boxes. Essentially, we are recycling a good percentage of cans/bottles without reward.
Not de-crying the idea, but if it was introduced, would folk by-pass the existing system to gain tokens?
I can see it a great incentive to reduce the cab/bottle litter about the streets..and the percentage of cans/bottles being recycled increasing enormously..and I can even see teams of kids can-picking about Brigg if its going to give them some sort of collective reward. And I can forward food outlets separating can/bottles from the their general waste if it's going to give an income.
But will the existing system of collecting domestic cans/bottles remain, if the new system is introduced, which is promoted by the token rewards?