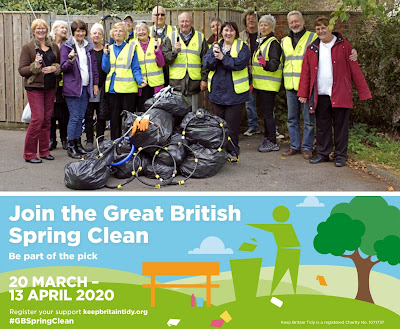 Brigg will be one of the towns taking part in a national tidy-up later this month.
This worthy initiative has been mentioned during the last couple of Brigg Town Council meetings.
FROM MIKE CREESE

The next volunteer litter pick event is the Keep Britain Tidy Big (Brigg) Spring Clean on Saturday 28th March.
This will start from the Black Bull, Wrawby Street, at 10:00am (where we suggest meeting up at 09:45 for check-in.)
We will have designated areas around the town to cover and will all meet back at the Black Bull at 11:30am for a ‘team photo’.
If you are short of time, you are most welcome to help for a shorter period.
We need Eco-Warriors for this event!
Volunteers of all ages are encouraged to join in and help; under-12s must be accompanied by an adult.
If you are interested in taking part, please register on the Keep Britain Tidy website...
www.keepbritaintidy.org/get-involved/support-our-campaigns/great-british-spring-clean
Simply go to - ‘join a clean up’ and follow the links to join the ‘Brigg Town Litter Pick’ shown on the map. OR contact me, Mike Creese, on either the Brigg Discussion or Brigg Towns people’s Voice on Facebook. You can also call me on 074 2345 8033 if you would like more information.
Posted by NIGEL FISHER at Thursday, March 05, 2020

In a different posting, I've already said that this very public spirited event needs to optimise public awareness.
For example, when a litter-pick is occurring all the normal visitor/punter to Brigg sees are a few dispersed folk in hi-viz picking up litter.
Later, the public don't normally see the amount of litter collected as the bags of garbage are quickly disposed in the back of a lorry. It all very sanitised.
Perhaps, A-frames and supplementary folk wandering about with placards both advertising and educating shoppers that a litter-pick is happening.
Maybe pile the bags of rubbish bags in the Market Place for a while allowing people to sed the amount of rubbish collected
Litter-picks will be endless events unless we educate and influence folk to change theIr behaviour and attitude towards dropping litter...it encompasses from one extreme, the simple notion of being a blot on the local landscape to components of global climate change and elements of wildlife ecology.