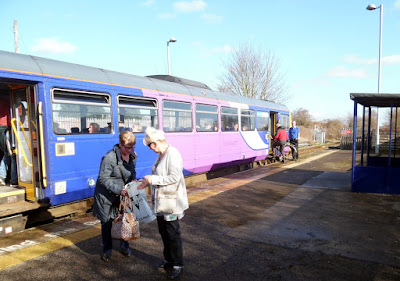 A plea has been made for Government funds to increase the frequency of passenger services calling at Brigg railway station, which currently receives trains only on Saturdays - three to Sheffield and three to Grimsby and Cleethorpes via Barnetby.
The call has come from the campaigning Brigg Line Group, which notes that the Department for Transport has a fund to revitalise some railway services across the UK.
An MP has now been approached to press for a 'shuttle service' between Cleethorpes and Worksop via Barnetby, Brigg and Kirton Lindsey.
Gainsborough, whose Central station is also on the Brigg line, has already managed to gain an improved service. The hope now is that Brigg and Kirton Lindsey can be given additional trains.
Brigg Blog will keep our followers posted about the suggested 'shuttle' after the case has been put to, and considered by, the Department for Transport.
A couple of milestones have been reached in recent weeks.
We saw the final 144 class Pacer 'railbus' picking up passengers at our station a couple of weeks ago, having served this area for many years. The 144s have been replaced by more modern units.
Last Saturday (February 29) the Northern company operated its final Sheffield-Brigg-Cleethorpes trains before the Government took over  in a move seen as 21st century nationalisation. Read details here....
Posted by NIGEL FISHER at Thursday, March 05, 2020

Why, when there are two almost Heaven sent start points in place, has the Worksop shuttle idea reared its head again? There is already the Northern operation to Gainsborough Central which forms a reasonable fixed basis for extensions east thereof and, if a unit was to be stabled at Cleethorpes overnight, the prospect of Trans-Pennine Train Crew involvement so as to gain and retain diversionary route knowledge becomes a proposition. With this option, the Barton Branch could remain with Northern and the Brigg Line could also then be conveniently used as part of the rolling stock fuel and maintenance cycle. The second option would be E.M.R. with extensions from Worksop of the Nottingham service in a similar manner to that at Gainsborough Central with Northern, subject to reasonable connexions being arranged from Sheffield off the Stopping Service. In this case the Barton Branch would probably be better catered for by transfer to E.M.R. and also implies the withdrawal of Northern's Stopping Service east of Retford. Unfortunately, these two options have one thing in common with the Shuttle proposal, namely that nobody appears to have any intention of sponsoring the idea and having experienced the attitude of local Politicians over the issue in the past I have yet to be convinced that any campaigning on the matter is not a waste of effort.

with the barton line under midland for the foreseeable future don't count on it.
train companies don't work together when profit is king.
extending the service to at least barnetby to connect with the trains to from Grimsby/Cleethorpes trains a early morning train would be sufficient to start with maybe a late/early eve train.

If you advocate that "Profit is King" then you must surely understand that: who runs what is of no consequence, there will most likely be no extensions east of Gainsborough Central either and, given the sparse passenger numbers east of Retford on the extended Sheffield Stoppers, there may well be no regular service to Gainsborough Central capable of extension in the not too far distant future. In fact, viewing the matter from a disinterested angle, one has to question the viability of the route under any conditions which could be foreseen, especially now given that it evidently has little regular traffic left to justify its existence. Were I within certain Railway Circles I for one would be pursuing closure, the cash wasted on just keeping what is in effect a partially mothballed route just in case it is needed one day could be better spent elsewhere. I have concluded that Messrs Hornsby & Co's. offerings have been deemed sufficient for Brigg and that is where the town's public transport future lies. Furthermore, why when it has been shown that paths meeting your advocacy of connecting with other services at Barnetby just don't exist, do you continue saying this without demonstrating clearly how everything would fit with the rest of the system? Anyway, I have long advocated the restoration of the passenger service over this line but, I can no longer "Live the lie" and have decided to be true to my own personal thoughts on the matter, thoughts that have been with me for many years, and state that I honestly believe the route is a lost cause and has no future, it is both unsustainable and expendable and, short of a whole load of rabbits being pulled out of the proverbial hat, is on borrowed time. Now could well be the right time to put the whole sorry affair to bed and let it go.