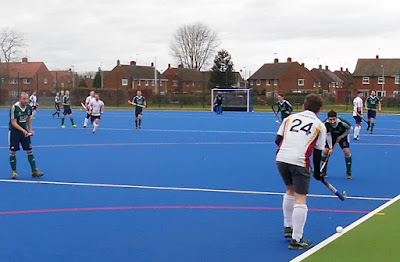 A Brigg sports club is now able to celebrate becoming champions, although this needs to be done invididually during Coronavirus lockdown!
Two months after the Brigg Hockey Club men's first teamers left the pitch after what turned out to be their final match of the 2019/20 season, we can now toast their success.
For with some games still to be played in North League East division two, points per game average has been used to produce a final table. And that has placed Brigg at the top of the standings.
The local club now has its sights set on the premier division - very apt as this is the 100th anniversary year of men's hockey being established in Brigg.
The club's three other men's teams, playing in the Yorkshire League, had enjoyable 2019/20 seasons without hitting the heights achieved by the first eleven.
The Brigg club also has three ladies' teams and junior sides.
PICTURED: A hockey match on the all-weather Rec Ground pitch, with Brigg in the green shirts.
Posted by NIGEL FISHER at Tuesday, May 19, 2020