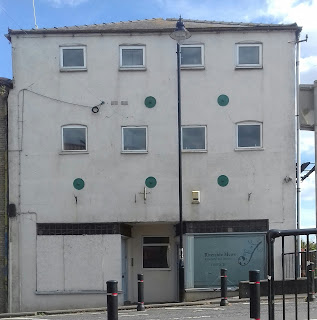 Alterations can be made to a shop front in Brigg town centre, North Lincolnshire Council planners have decided.
Approval to make changes was initially granted two years ago. Now a revision to the entrance doorway leading to flats has been sanctioned by the local authority.
The Riverside Mews building - pictured above - adjoins the County Bridge.
An artist's impression indicating how the frontage will look shows a nice ground floor layout with 'Riverside Mews' lettering incorporated.
An assessment report prepared by council staff said what was proposed would not alter the character of the building.
It is classed as a non-material amendment to the already granted permission
Decades ago the building was occupied by the Farmers' Company and river barges used to moor up.
The Mews now offers rented accommodation.
Posted by NIGEL FISHER at Monday, May 18, 2020