BETTER OFF IN BRIGG? 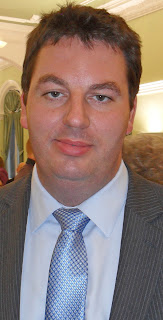 Not so long ago the issue of Brigg's boundaries was raised within the Town Council. Presently, Water's Edge housing estate (adjoining Cake Mills Bridge and the New River Ancholme) is in Broughton; Ancholme Leisure Centre and the former Brigg Sugar Factory site are Scawby's; Brigg Garden Centre (hugely popular with visitors arriving by bus and car) is in Bigby, and therefore outside North Lincolnshire, as are some properties at the far end of Westrum Lane; while housing development suggested for the area behind Western Avenue would encroach into Wrawby.
The questions are:
1) Do residents living in these areas look to Brigg for the majority of their services (eg shops, banks, petrol stations, children's schools)?
2) Do the majority of the general public currently believe facilities like Ancholme Leisure Centre and Brigg Garden Centre are in Brigg already?
So far it's just talk and IF, and we stress IF, things went any further, adjoining town and parish councils would need to be fully consulted, together with North Lincolnshire Council, and, of course, the people and businesses affected.
Four things brought this topic back into my thoughts:
1) Seeing written reference to "Ancholme Leisure Centre, Brigg" in a document (no mention of Scawby).
2) Observing many people walking into, and out of, the entrance to the Water's Edge housing estate and heading for, or returning from, Brigg (shopping bags in hand).
3) Seeing schoolchildren tracing the same route (clearly not educated in neighbouring parishes).
4) The current Government's introduction of a Locality Bill, under which it is pressing for local folk/communities to have a bigger say in running things, rather than have to go along with instructions "from above" in central government.
This being so, surely it would be simple just to hold a local referendum to determine the will of the people about Brigg's boundaries being extended to take in places like Water's Edge.
Perhaps Andrew Percy (PICTURED), Brigg and Goole's Conservative MP, would care to comment on that one.
Posted by NIGEL FISHER at Monday, December 27, 2010

As a resident of Scawby Brook I would strongly object to being part of Brigg. The town council, unlike Scawby Parish counci, gave us no support on the issue of Brigg REP.

I suspect (though I might be wrong) that such a change would already be possible through public petition, so long as there are enough residents in the areas. I don't know if a direct merger would be possible, but a new (say, Scawby Brook) parish/community could be created and then subsequently merged into Brigg.

One considerable problem though is that Kettleby and Westrum are not just in different parishes, but completely different local authorities. That would require a Boundary Commission review (which could also change parish boundaries if they wanted). I'm under the impression that it would also have to be incorporated into an Act of Parliament. I doubt such a thing would happen just for Brigg(!), but were structural changes ever proposed to take Lincoln from a two-tier authority to a group of unitary authorities, that could be an appropriate time. The current government canceled some similar changes in its Local Government Act 2010, so I doubt the chance will come for a while.

On a tangent, you should read about Travel To Work Areas (TTWAs) and the Redcliffe-Maud Report of 1969 (and the Senior Memorandum). They all use ideas of what might be described as "watersheds" in social geography. Basically, administrative boundaries are drawn according to the areas people *actually* live and work on a day-to-day basis, not those handed down through tradition (some of which are well in excess of a thousand years old). The Senior Memorandum is especially radical and well worth looking at for the maps alone.

Sova seems well-versed in local adminstrative issues, Scribs.
He/she makes some interesting points.
Would there be any advantage of pursuing the almalgumation of Brigg TC with adjoining parish councils (or parts of) to form a 'Glanford TC'?
As Sova indicates, Westrum Lane and Keetleby are in another county's boundary and this presents additional issues.
However, Brigg has a heirachial influence that far exceeds its defined boundary........but owing to its position of partially straddling the Lincolnshire boundary......this can exacerbate the problem of Brigg TC having little, if any influence, on Lincs CC proposals of creating potential developments on Brigg's periphery, which feed from Brigg's infrastructure.
For example, we are already aware of proposals for the development of mixed housing and light commercial use on the old Pingley Camp site. Although I have no particular objections, it a bit like a friendly neighbour automatically expecting he can plug into your drains and use one's drive to gain access to his property.....and he pays a third-party for such privilege!

Andy - surely the point is that Scawby Brook is NOT in Brigg - nor is the the site of the proposed straw-burning power plant.

Google 'Conservativehome' and you'll see our MP is in the top 10 of the 'most rebellious'! In the graded listings as a new MP he is 2nd!!!!!

AP has rebelled 14 times and has made 3 positive abstentions.

I like a rebel.....he'll be on tv next........will he become the 'Hotspur' (Lord Harry Percy) of parliament, or 'Lord Percy Percy' of Blackadder fame?

One obvious and distinct advantage of a bigger town boundary is that it would carry more weight and a wider presentation on mutually shared issues.
Brigg TC is unable to say what goes on in Wrawby, in the same manner is only ask to comment on the development of Pingley Camp.
It does seem to be at a stage when Brigg is over-confined by its own boundary. As Brigg evolves, there needs to be, perhaps a review for the future.
Once developoment is complete within Brigg's boudary, it is likely further development will occur outside.
Brigg and district folk are going to have a stronger voice and be more of a master/mistress of the areas destiny with a council that represents the interests of a wider community.

Although I agree the Scawby Brook residents make much use of Brigg facilities, I would also say that many including myself make much use of the facilities in Scawby. I agree it is a nonsense the new estate being in Broughton but please don't anybody suggest any more of Brook is made part of Brigg Parish.

Ken - I have to admit I took no notice of Andrew Percy until a few weeks ago. I thought he would be another backbench "yesman". But a certain news story caught my eye when it named him as a "rebel". I looked into his (albeit short) parliamentary history and saw that he is shaping up to be quite an independent-thinking MP. That's all good in my book.

Andy lives in Scawby Brook and doesn't want to be part of Brigg...but he's posting in BRIGG Blog.
Are you going to ban him, Nige?

Andy P. need not worry, Ken. We welcome visitors from South Korea and Scawby in equal measure. He makes a fair point about some folk in Scawby Brook looking to Scawby for some of their services. However, you can't argue with the name "Brigg Sugar Factory" for the development site, while some of these modern power people seem to consider "Brigg" an apt description. It takes a long time to re-write history, even for major politicians.

I hope I don't get locked up in the Tower!

I know who Andy is, Ken, but as he's chosen not to reveal his surname via Google then I respect his decision. He's not Pandy, by the way. However, there was a girl in Brigg some years ago who's nickname was Looby Lou.

For those of us who are older enough to remember, 'Andy Pandy' alongside 'The Wooden Tops', 'Rag Tag & Bobtail', 'The Flower Pot Men' and 'Muffin the Mule' replaced by 'Picture Book', was one of the BBC TV's 'Watch With Mother' programmes - 2pm to 2.15pm.

One controversial issue that emerged, before the Permissive Age of the 60's, was that Andy Pandy, Looby Lou and Teddy lived together inside the same large wicker basket. They eagerly climbed into the basket at the end at each programme and emerged a week later very happy!

You'll have to do a Nostalgia on such, Nige