BIG ATTENDANCE FOR THE WILDER ANCHOLME PROJECT LAUNCH IN BRIGG 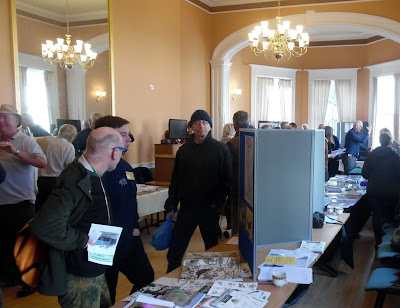 There was a sizeable attendance in Brigg for the launch of the Wilder Ancholme Project at the weekend.
Public consultations and project launches in our town often fail to attract the numbers they deserve, but this was far from the case in the function room at the Buttercross on Saturday (February 22) as the above picture shows. And we gather we weren't there during the peak period!
The organisers wisely selected the day of the month when the Brigg Farmers' Market was operating - increasing footfall in the Market Place - and this certainly helped to boost the launch turn-out.
The Heritage Lottery-funded Wilder Ancholme Project's stated aim is "Rediscovering and Rewilding a 'Lost Landscape' - Lincolnshire's Ancholme Valley." This involves exploring its hidden heritage, local history and biodiversity.
We'll be hearing a lot more about this 18-month project which is already "working with the community to explore the Ancholme valley's past, present and future."
Local folk are being invited to share their thoughts and memories of the valley through North Lincolnshire Museum (represented at the launch event).
Also present on stands were members of the project team, the Lincolnshire Wildlife Trust  and Brigg's Paul Hildreth, well-known for his knowledge of geology.
We also spotted some local farmers paying a visit to Saturday's session, but most of those who attended were interested members of the public who picked up a number of helpful leaflets that were free to collect.
Brigg Blog has offered itself as a source of information for local folk as the project progresses and events arise.
But project team made it clear that even if you failed to make it to Saturday's session, there's plenty of time to get involved and contribute. They are keen to hear your views and to see you at future events.
Visit www.ukeconet.org/ancholme.html - follow Wilder Ancholme on Facebook or email info@hallamec.plus.com
The project also has a Twitter presence @WAncholme and is on Instagram - see wilder_ancholme
Many events across the valley will be coming up over the next 12 months, including some in Brigg, Broughton and Bonby. They include a woodland bat walk, a dragonfly walk and a Big Test Pit Dig Day (recording archaeological finds).  Brigg Blog will preview these nearer the time.


'A Vision for a Wilder and Wetter Ancholme Valley'
The project says in a post on its website: "Adapting to change and working with nature may mean some lands will be wetter and many areas will be farmed differently. However, this VISION  is one of a wetter countryside yes, but also one with a vibrant farming economy and community at its heart. Developed effectively, a wetter Ancholme can be a growth-pole for regional leisure and tourism economies, a wonderful wildlife resource, and an attractive countryside too. As an artery linking the great Humber Estuary, the beautiful Lincolnshire Wolds, the coastal marshes and sand-dunes, and the heart of rural Lincolnshire itself, the Ancholme can be transformational for the region and bring enormous benefits to people, nature, and the economy.
"We are seeking opinions, ideas and partners to bring about changes over both the short-term and the longer timeline." Read the full post through this link...