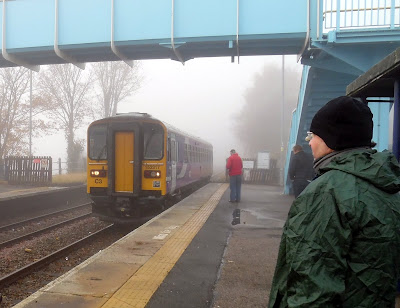 Brigg railway station has a very sparse passenger train service - Saturdays only and then just three trains in each direction calling between Sheffield and Cleethorpes. So a very apt Leap Year promotion has been arranged for February 29 - the rarest date in the calendar, only encountered every fourth year.
The promotion on the final Saturday this month will encourage people from other communities along the Sheffield-Cleethorpes line, in South Yorkshire, North Nottinghamshire, West Lindsey and northern Lincolnshire, to take the train and visit Brigg, where local businesses will be glad of their custom, including eateries and niche shops.
The Business Partnership Rail Group has teamed up with a graphic designer to produce a poster encouraging people "to leap on the unique Saturday only train service and visit Brigg." 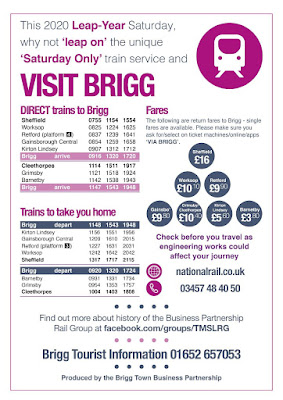 The graphic, seen here, gives the train times and prices from Sheffield, Worksop, Retford, Gainsborough, Kirton Lindsey, Grimsby and Cleethorpes.
February 29 will be the last day when the Northern company runs trains along the iconic Brigg Line. After the final train has completed its journey on Saturday, it's a case of all change for this service with 're-nationalisation' taking place.
The Department for Transport says the government will operate the Northern Rail franchise from March 1, 2020, and adds: "Passenger journeys will not be affected."
While the government is taking an interest in railways in our part of the country, Brigg Blog thinks it should consider improving what's on offer at our station.
Most stations, including the one at Barnetby, now have very helpful display screens on their platforms which give waiting passengers constant updates about train arrival times and delays, backed up by loudspeaker announcements.
Sadly, such facilities have yet to be installed at Brigg station.
Recently, when signalling issues (beyond the Northern company's control) delayed the first Saturday morning train by 50 minutes, there was no way to inform people waiting on platform one at Brigg station.
Brigg Blog was very fortunate on this particular Saturday; with a tight connection to catch at Barnetby on our way to Newark, we decided to hire the CallConnect dial-a-ride bus service to take us from Brigg to the village station... for a bargain £2.10p!
In view of the unexpected 50-minute delay, this proved to be a very wise move.
However, when we came back from Newark via Lincoln, the final Northern service of the day from Barnetby was on time and we arrived at Brigg station before 8pm, as planned.
The government wants to improve punctuality and reduce cancellations on services currently run by Northern. However, some of these are down to reasons beyond the control of the train operator. Passengers will be hoping for better things after March 1 but it will take time.
Posted by NIGEL FISHER at Saturday, February 22, 2020

as I've said before here is an opportunity to lobby the "public owned" franchise to extend the daily service from gainsbrough central.north lincs council with both brigg & kirton town coucils with perhaps local village parish councils & MP's to get together & reinstate the service

an idea was put forward that you could run the services from Sheffield and terminate them at Barnetby and then at least you have a link if people want to go to Grimsby Town and Cleethorpes and vice-a-versa.

Yet again there has been very little support from North Lincolnshire Council the three local councillors and the MP to support the Brigg Line.

they can't even be bothered to tarmac 250 yards of footpath from the station front to Station Road so that visitors to this town don't have to travel through the mud and dirt.

The train does not go to London so they are not interested.

The big falling down issue in this case could well be pathing: I would guess that east of Gainsborough the trains, even if terminating at Barnetby, would have to occupy similarly timed paths to those already operating on Saturdays, in which case there would be no reasonable interchange with services to and from Cleethorpes although this may look somewhat different after the projected E.M.R. service enhancements in 2021.

There are hourly paths to Sheffield every day to and from Gainsborough central, with trains arriving at 6 mins to the hour and departing at 16 mins past the hour. I don't think there would be a major path problem between Wrawby and Barnetby, and of course there is no path problem at all between Gainsborough Central and Brigg, it's just that Northorpe, KLS and Brigg are not routinely open before 13:00hrs on a weekday. It would need a lot of looking at with timings, crews diagrams, interconnection issues and cost implications, but seeing as there is a lot less feight using the Wrawby to Brocklesby section that there used to be, you would hope that we could put a massively under used railway to better effect.

Regardless of ownership, the Service Specification is determined by the Department of Transport, it is towards this body that representations will have to be made and it makes no difference as to whether the State or Private Interests operate the Franchise, as long as the prescribed timetable &c. is observed then the Operators will be deemed to have adequately discharged their duties.

Therein lies the rub, which was my point about pathing: xx.56 to xx.57 at Gainsborough would imply a Barnetby arrival at something like XX.27, missing the Transpennine service by around nine minutes although there would be the possibility of connecting with odd E.M.R. service now and again but only as far as Grimsby Town. Returning from Barnetby, the departure would have to be around xx.45, eight minutes prior to Transpennine and missing most E.M.R. services from Grimsby Town. Not only that but as the above also leads to two trains in opposite directions having to pass at times meaning that additional time would have to be inserted to enable them to pass at Northorpe or extended station allowances at Gainsborough Central. Running through to Cleethorpes would be the more desireable option but as the current sparse operation is governed and affected by pathing elsewhere it is clear that any future alterations will be likewise very constrained.