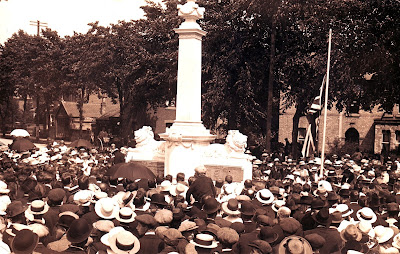 
North Lincolnshire Council has made £15,000 of Community Grant funding available to support World War I centenary commemoration events and activities in North Lincolnshire.
“Communities across our area will be looking to mark this occasion that affected so many families”, said Leader of North Lincolnshire Council, Cllr Rob Waltham (Brigg & Wolds).
“This special centenary fund will allow for small community events or even larger celebrations to mark 100 years since the end of the First World War.”
Town and parish councils and community groups in North Lincolnshire can apply for up £250 towards the cost of planning a community event.
If you are a member of a community group and would like to apply for funding to help host a WWI centenary event, please contact our Community Grants team for an application form on communitygrants@northlincs.gov.uk
Cllr Rob Waltham continued: “In the past, we have had specific grants available to help communities celebrate the Queen’s Diamond Jubilee in 2012, and her 90th birthday in 2016. Enabling communities to come together once again to mark the centenary of the First World War will help ensure that the sacrifices of previous generations will not be forgotten.
“Bringing people together for events helps build and maintain our strong sense of community. We’re proud to be able to offer this support to groups in our so they can mark this significant occasion.”
N.F ADDS: Brigg's Monument war memorial will be refurbished ahead of the 100th anniversary later this year. Our picture shows crowds at the landmark's dedication ceremony on June 15, 1919. The guns fell silent in November 1918 but the treaty that officially ended hostilities was not signed until the following year. The Monument was gifted to the town by Coun Harry Stamp.

Good, but cleaning the war memorial is not really specific to commemorating WW1. I do hope it's not the only planned event during this special year.
This year's Remembrance Sunday will be re-adjusted to 11 o'clock, but this was really effected by the police removing the default over many years of claiming they could only man road closures at 12 noon....now this default has been lifted, there is no excuse of deferring the 2 minute silence by one hour.
Consequently, it would be welcomed if Brigg Town Council could indicate what specific ceremonies are planned to remember the 100th anniversary of the WW1's Armitice....in only 5 months time. Lest we Forget.