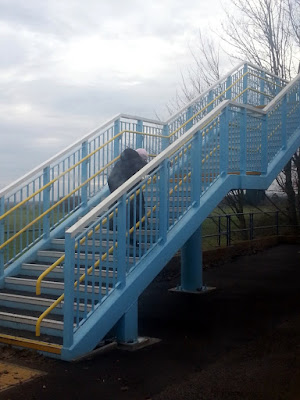 Brigg railway station could certainly do with some cash from a new government fund, as the picture above demonstrates.
Disabled passengers will benefit from a range of accessibility improvements across the rail network, said the Department for Transport in an announcement on Monday (July 8).
Installed a few years ago to replace a cast iron survivor from the Victorian era, Brigg's footbridge gives access to platform two, used by trains heading for Gainsborough, Retford and Sheffield.
However, our footbridge does NOT currently have a lift or gently sloping ramps (as installed at nearby Barnetby station). So people with mobility issues find it difficult or, in some cases, impossible to use it when crossing the tracks.
The Brigg line only sees passenger trains on Saturdays, but surely that's not a factor to be taken into consideration.
Nusrat Ghani, Accessibility Minister, said: "While many take for granted the ability to travel easily from A to B, access for the fifth of people who identify as disabled can be far from straightforward. We want disabled people to travel easily, confidently and without extra cost, which is why it is fantastic to be opening this fund today. I look forward to seeing what ideas the industry has for accessibility improvements as we work towards a more inclusive rail network."
The Department of Transport says the 'industry' is being invited to nominate stations across Britain that would benefit from improvements to accessibility.
The fund will be open for applications from stations in need of accessibility improvements, "leading to small-scale enhancements such as tactile paving, handrails and Harrington Humps, which increase platform heights."
Taken together, the Department says, these improvements "will open up journeys for disabled passengers, allowing them to travel with confidence."
Brigg Blog couldn't find any specific reference to footbridges at small stations in the statement issued on launch day. But, as the old saying goes, If you don't ask, you don't get...
We welcome the new fund and its aims; the government is on the right track here. But we hope that smaller stations like ours will get a decent share of the funding available, in due course. Time will tell.
The above picture, supplied by a local rail campaigner who is keen to see improved access, shows "a poor old lady struggling to get over the footbridge at Brigg just after it first opened."
View the full announcement from the government about the new fund through this link...

a board crossing would do at track level - or instead of wasting money on that footbridge , they should of built a new station up near the signal box where you could of crossed at the crossing

Another alternative, proposed by the campaign group and others some years ago but rejected by the railway either rightly or wrongly but I'm sure Network Rail et al. had their reasons, was to extend the single line slightly so that there was only the need to retain the Up Platform at Brigg with both the Down Platform and the Footbridge being abolished as a result. The idea of a re-located station close to the Level Crossing has some merit, the provision of which could be reduced by a shorter extension of the single line mentioned above but access to any such location and car parking space may be an issue here. I'd have gone with the former but it's all water under the bridge now, we are where we are and the money has been spent so we have a larger, higher bridge with more steps than that which it replaced and a miserly sum available country wide as part of the current offering - just £20m of which I would expect a certain amount to be swallowed up by administration and bidding costs leaving the usual penny packet amounts for a few improved signage and paint pot schemes along with the usual photo' opportunities to feed the vanity of the odd local politician!