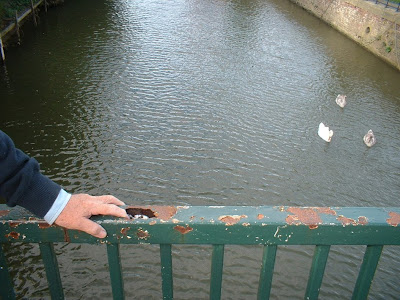 A referendum of Brigg households could be carried out through the newsletter Brigg Matters by our Town Council.
The idea is to gauge public opinion over improving the look of the County Bridge.
However, before that can happen the cost to Brigg will have to be worked out, after discussions with North Lincolnshire Council.
The matter will then be reconsidered at February's monthly meeting of Brigg Town Council before the very unusual referendum could take place.
A scheme of improvements to the bridge, including the removal of the ugly fenced-off walkway and replacement of the metal railings with stone balustrades, was drawn up some time ago.
However, an application for Heritage Lottery funding has been turned down, and with North Lincolnshire Council, as the highway authority, not planning to press ahead out of its own budget, Brigg Town Council is being asked to consider taking charge of the scheme (total cost £250,000 to £300,000).
Currently the Town Council's complete spend for a financial year is about £100,000, meaning there would need to be an extra charge levied on Brigg households, as happened in the 1990s to meet the cost of the Angel Suite community venue.
Coun Tom Glossop told January's Town Council meeting, held on Monday, that finance and grants might be possible from other sources. He also stressed it was possible for a Town Council to borrow money over 10 years, spreading the cost to charge-payers. At a very rough estimate he thought the extra cost to Brigg households could be 25p per week if the council sought £100,000. First, however, they would "need to get North Lincolnshire Council on-board."
Noting the efforts made over many years to press for improvements to the County Bridge, Deputy Town Mayor Coun Ben Nobbs said it would be "an absolute disaster to see all that hard work come to nothing."
Coun Glossop suggested businesses in the area might be interested in paying a few hundred pounds to, in effect, part-sponsor the bridge, such as an area of the stonework.
Coun Edward Arnott said the council needed to discover the cost of the scheme first and successfully suggested further consideration of the issue at the February meeting.
If you want to make your views public at this stage, you can post a comment here. Brigg Blog is read by town councillors so they will be able to note what you think ahead of D-Day next month.
Posted by NIGEL FISHER at Wednesday, January 27, 2010

Although renovation of the bridge would be welcomed by many Brigg residents , I'm sure the majority would not want 25p / week added on to their council tax to do it .
With a general election coming up I am surprised a certain news letter received whether you want it or not hasn't taken up the cause . Whats the point of removing all the trolleys from the river when the bridge is liable to collapse into the depths to replace them ?
I admire Tom for sticking to the task , and if anyone can return the bridge to it's former glory Tom can . However I fear this may be a ' Bridge To Far ' .

In the style of the Devil's Advocate:

Are we getting over-focussed on restoring the bridge to it's former glory?
Is is possible that we've landed on Square 9, without throwing a 6 to start?
Have we become a little presumptuous; assuming folk will/will not support such a project without the benefit of alternatives, or an element of choice?


Possible questions to ask: (not necessary in order)
1. Is it a priority?
2. Are there other priorities?
3. What is the actual aim of restoring the bridge?
4. Are there alternative themes/ideas/designs for restoration?
5. If so, what are such costs.
6. Are there any safety issues involved with present state of bridge - structure - railings? If so, what action is being pursued?
7. Have Brigg folk actually been asked for their priorities?
8. How did past Brigg TC's projects evolve? What were there aims? How was the degree of success objectively assessed?
9. Does Brigg TC have an objective Action Plan for 'Improvement' projects? If so, was has been identified as needing remediation?
10. Will a programme of small scale, quickly achievable 'improvement' projects stimulate a better incentive/interest in progressively more demanding and major projects?