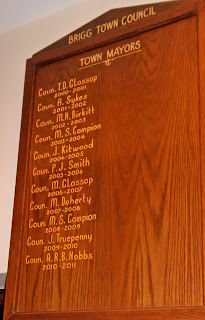 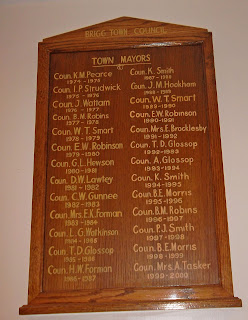 The first citizens of Brigg – our Town Mayors since 1974 – are recorded on these commemorative boards in the Angel Suite, the HQ of Brigg Town Council.
Ken Pearce was the very first to be elected from within the ranks of the newly-formed Brigg Town Council.
The Seventies were completed by Ivor Strudwick, Jack Wattam, Bryan Robins, Bill Smart and Eric Robinson.
George Hewson – in honour of whom the North Lincolnshire Council office block is named – was the initial Town Mayor of the 1980s.
Since then we’ve had husband and wife as first citizens – Herbert Forman in 1986/7 and Eileen Forman in 1983/4.
We’ve also had mum, dad and son – Maureen Glossop (2006-7), Tom Glossop (1985/6, 1992-3 and 2000/1) and Tony Glossop (1993-4).
Others to have served as Town Mayor, some more than once, were: Derek Lawtey, Chris Gunnee, Les Watkinson, Keith Smith, Mike Hookham, Enid Brocklesby, Barbara Morris, Adele Tasker, Tony Sykes, Mike Birkitt, Mike Campion, John Kitwood, Penny Smith, Michael Doherty, Mike Campion, James Truepenny and Ben Nobbs.
Coun Kitwood is the current first citizen. And when his term of office comes to an end next Spring, he is due to be succeeded by the current Deputy Town Mayor, Coun Carl Sherwood – a new surname to join the Boards of Honour.
Ken Pearce (1974-5) is the only Town Mayor I can’t claim to have written about during his year of office. I seem to recall he was manager of Jackson’s store in Queen Street, in the building latterly used by Coleman’s Restaurant, and was a major figure within the Chamber of Trade.
Some Brigg Town Mayors also served on other councils higher up the local government ladder.
After the local government changes of 1973/4 which removed connections with the historic Lindsey authority, Ivor Strudwick served on Humberside County Council, while George Hewson, Derek Lawtey, Bill Smart, Bryan Robins, Eric Robinson and Herbert Forman all had spells on Glanford Borough Council.
Brigg Town Mayors have held down a variety of jobs, trades and professions, including a publican (Tony Sykes), a steelworks engineer (Chris Gunnee), a steelworker and former chip shop proprietor (Jack Wattam), a deputy borough clerk/solicitor (Mike Doherty), a headteacher (Mike Campion) and a youth leader (Tom Glossop).
Some had close connections with well-known Brigg businesses, including Les Watkinson (Varlow’s the draper’s), Enid Brocklesby (Bowen’s bakery), Derek Lawtey (Sass’s garage).
The Town Mayor’s duties include not only attending events in the area, but also chairing the monthly meetings of the Town Council.

“YOURS TRULY” IS THE COMMUNITY PUBLISHER. YOU CAN REGISTER WITH THE SITE AND THEN UPLOAD YOUR OWN NEWS, SPORT AND VIEWS.

When you think of the hours of service that are associated with the names on that board it is a high honour to be included with them.