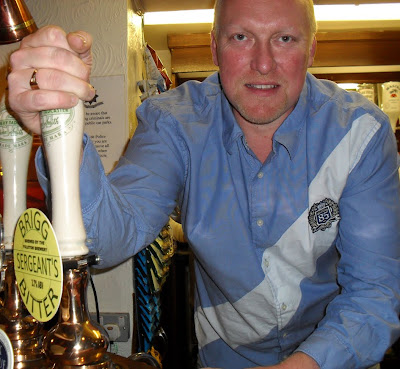 Hurry down to the Black Bull if you want to savour a pint or two of Brigg's brewing heritage. Just two barrels of Sergeant's Brigg Bitter are on tap - and it's selling very well.
Sergeant's Brigg Brewery - off Bridge Street - closed in autumn 1967 after well over a century slaking local thirsts. However, Fulstow Brewery's Phil Ellis has now rediscovered the old recipe and done his level best to create the taste of Sargent's, which at one time in the 1930s was declared champion ale of the entire UK at a contest in London.

Fulstow Brewery has supplied two barrels to the Bull and seven to other outlets in mid-Lincolnshire. The first pint at our Wrawby Street hostelry was pulled at 7.30pm last night by mine host Richard Smith (see picture above), and the brew was voted an immediate success by regulars and some who dropped by specially for the occasion.
Brigg Blog tried four during the evening - thorough research was called for! - and even some drinkers old enough to have sampled Sergeant's in the 1960s gave it the thumbs-up at £2 a pint (introductory price). Those oldies hoping to get a pint for an old shilling were sadly disappointed.
For real ale devotees, it's a light, refreshing brew (3.7 per cent), being aptly described by one supper last night as "a good session beer."
Among those in the Bull for the re-launch were well-known Brigg brothers Martin and Johnny North, whose father Jack was the last head brewer at Sergeant's before closure came due to 'rationalisation'.
Fulstow's Phil brought along a few old Sergeant's archive pictures he'd uncovered, one of which showed Jack North and wife Peggy enjoying a brewery social night with many of their colleagues. 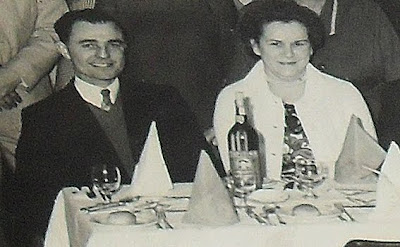 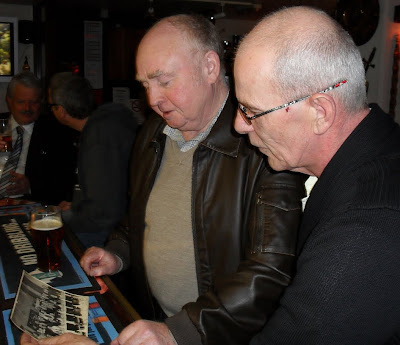 Here we include a shot of son Johnny at the bar (that's him on the right) admiring the picture featuring mum and dad. Worry not, we've copied it for him!
We'll have to wait and see whether Brigg Bitter goes down well enough with the Lincolnshire public - not just those in our town - for Fulstow Brewery to do some more barrels, or even bottle some for home consumption. 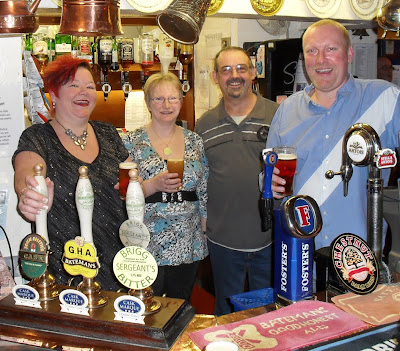 Phil - seen above behind the bar with his his better half Dawn, and mine hosts Amber and Richard - obviously can't access the original Castlethorpe spring water available to Sergeant's decades ago, but many of us have raised a glass to him in appreciation of his efforts in recreating a taste of Brigg history.
We've asked Phil and Dawn to keep Brigg Blog fully informed about future developments, so keep watching for updates. 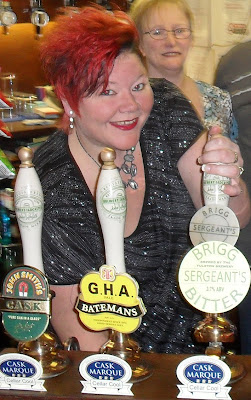 PS We are told by landlady Amber that Tony Sykes - ex-Brigg councillor, Town Mayor and long-serving Black Bull licensee - will be following this story with great interest from Portugal, where he now lives. Family best wishes, Tony, and likewise from some of your old customers and mates over here. We hope it's warmer where you are! 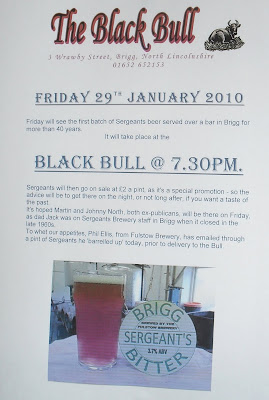 Congratulations on your extensive research into this story Nigel .

All in the call of duty i preshhume.

When you study Nige's proclaimed interests they include, trains, beer, cricket, local history, BGS and wimmen.

We've have regular and extensive blogs on the former.......can't wait for Nigel's WIMMEN blogs.