POLICE ON TOP IN CRIME FIGHT

A big reduction in domestic burglaries and incidents of anti-social behaviour are revealed in Humberside Police's quarterly update for the Brigg area. Plus information that action is being taken to tackle the problem of vehicles being in Brigg's town centre pedestrian area without lawful reason. Figures were revealed to members of the public, and councillors, attending the Brigg Neighbourhood Policing Panel's first meeting of 2010, held in the Angel Suite. They are for the last six months, July to December 2009, compared to the previous six months, January to June. Brigg Blog has highlighted some of the main topics to draw your attention to them. 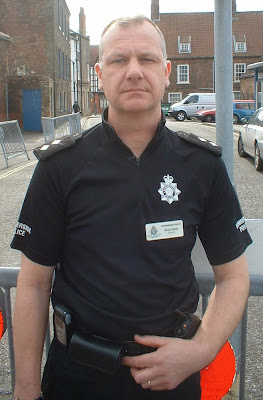 By Insp Brett Rutty (head of rural policing for our area)

Burglary to people's homes has decreased by 31% over the last 6 months. This type of crime remains a priority for policing and residents can help us reduce the number of crimes by taking precautions such as fitting good quality door and window locks and looking out for each other, reporting any suspicious activity to the police.
10% of all burglaries to people's homes during 2009 were sneak-in offences where the opportunist offender has taken advantage of insecure premises. Although this is a much better picture than other team areas where as many as 45% of crimes fall into this category, please do ensure you keep your doors locked.
Thefts of Vehicle have decreased by 12% during the last 6 months but Thefts From Vehicle have increased by 7%. This is a reversal of the situated reported at our last meeting. Figures are relatively low, 22 thefts of vehicle and 30 thefts from vehicle over the last 6 months. This type of crime is still showing a downward trend but please remain vigilant, report any suspicious activity and do not leave items of value in your car.
The Neighbourhood Team continue to focus on and investigate Criminal Damage and during the last 6 months there has been a reduction of 2% in this type of crime.
Incidents of Anti-Social Behaviour cause concern to the community and to the Neighbourhood Team. A lot of effort is being put into identify the minority of teenagers who engage in anti-social behaviour, identifying hot spot locations by monitoring calls for service and through community contact and targeted police patrols to those locations.
We have seen a reduction in calls for service for Anti-Social Behaviour of 25% over the last 6 months, compared to the previous 6 months. This is very encouraging but we are aware there are so many factors influencing statistical information so Neighbourhood officers and PCSOs will continue to work with the community to tackle this issue.
Here in the Brigg and Wolds Neighbourhood, PC Jane Proud and PCSOs Lynsey, Lisa and Craig continue to work with local people and partners across the Neighbourhood.
Regular visits are being made to the Millennium Green, a priority location for the team.
Jane has also raised awareness of the issues with colleagues on the Incident Response teams who are supporting the Neighbourhood Team and the community by visiting the area late at night. There have been very few calls for service to this location recently and no issues apparent when officers have attended.
Issues around driving, parking and cycling in the pedestrian area of Brigg are being addressed. Retailers have been visited and the problems discussed with them and daily visits are being made to the area.
Motorist who have failed to heed warning letters or face to face advice have been issued with fixed penalty tickets.
The team has noticed an improvement, there are fewer cars being parked in the pedestrian area but patrols are continuing.
The Dispersal Order covering the centre of Brigg is being patrolled by the team particularly in the evening. Although 3 females under-16 recently had to be dispersed from the area and young people do still congregate together, officers have noticed a marked improvement their behaviour.
For me, a measure of success is the how the public feel about the area. A snapshot survey, carried out by Safer Neighbourhoods in March 2009 asked people on the streets of Brigg, how big a problem did they think ASB was in the Springs Parade area of the town? Of those questioned, 12 felt it was "a fairly big problem", 5 "a very big problem" and only one person thought it was "not a problem at all."
The same question was asked of passers-by in December 2009: 4 said it was "a fairly big problem", 3 a "very big problem" but 9 people felt it was "not a problem at all."
Although only small numbers were involved in the survey the results are an indicator of public perception.
The order remains in force until the end of March.
Two youths were recently dealt with for criminal damage offences committed in Brigg. One received a Police caution and the other has been summonsed to court.
Posted by NIGEL FISHER at Wednesday, January 13, 2010

Remember those classic cowboy films were the baddies wore black and the goodies white?

The picture of Insp Brett Rutty reminds me of the infamous cowboy, Cary Lane, just before he hitches his horse to the saloon railings!!

Is there a legal difference between buglary and housebreaking?
If so, what is it please?

Some drivers are still using the pedestrianised area to tickle the cash machines. Usually in posh 4 x 4's with stuck-up noses!

Any progress on who nicked Wrawby Church's lead roof?

What positive diversions do we have for the so-called anti-social group of teenagers? Individuals often lack self-esteem, poor self-image and low educational attainment and gain bravado from delinquent group behaviour.

Boxing club, five a-side footie, organised pool table and canoeing all allow missing elements of success and diversion - but where and by whom?

.....carping on about a separate issue, Cary Lane is tatty...and the wobbly galvanised railings don't help to improve the area's image. It is not helped with its proximity to Spring Way.
Can't the area be improved? The railings replaced by something more pleasing to the eye - perhaps with flower beds?? And how about the odd junk and concrete slab (remnant of Spellys butcher's hut) - looks akin to fly-tipping...