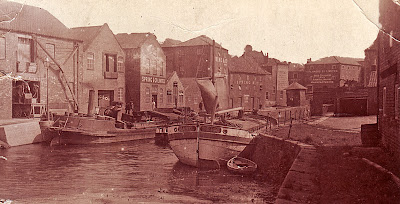 Brigg Heritage Centre - located in the Angel building in the town centre -  is now offering a new exhibition outlining the fascinating history of the River Ancholme "that has shaped the town and its commerce."
Many stories and pictures feature, so pop in next time you have a few minutes to spare and learn more about the river's transformation from "Trade Highway to Leisure Byway."
Brigg Heritage Centre offers free admission and is open from 10am on Tuesdays, Thursdays, Fridays and Saturdays. It closes at 2pm, apart from Saturdays when the centre stays open for an extra hour.
Take the stairs near the Cafe Courtyard or use the lift provided.
Above is one of Brigg Blog's favourite archive pictures recalling the golden era of riverside transport.
The early 20th century view shows a busy scene on the Old River Ancholme, with barges evident.
Note the funnel for exhaust gases on one vessel and a sail on the other. But no horses are evident on the towpath, their era of barge-pulling having ended.
On the bank to the left are premises operated by the Ancholme Packet Company and then a row of buildings belonging to Spring & Co, the local preserves maker and major employer.
For many decades the Packet Company operated passenger-carrying boats along the river and also moved goods.
The large building in the distance, adjoining the County Bridge, belonged to the Farmers' Company - seed crushers and chemical manure manufacturers.
It's still with us today as Riverside Mews, offering accommodation.
Stand on the bridge and look closely as the side of this building; you can still see how it was served by visiting barges.
The westerly (right-hand) bank early in the 20th century was dominated by Sargents Brewery, which made its award-winning ales from Castlethorpe spring water.
Imposing Georgian detached residence Riverside House, and the White Hart pub, were beyond.
The brewing house made its last beer in the late 1960s, with Riverside House - then derelict - being demolished two decades later.
This picture is similar to ones of similar vintage taken in industrial towns and cities across the UK. For riverside Brigg was then a hive of commercial activity.
These days only pleasure craft and rowing boats make use of the Ancholme at this point, together with anglers, ducks and swans.
Fishermen still refer to the area as Spring's Stretch - remembering the jam-making factory which closed in the 1970s.
The wall seen on the western bank, nearest the camera, was tastefully restored/rebuilt not many years ago - all the way down to the County Bridge.
The viewpoint chosen by the photographer more than 100 years ago was where the river widenened so barges could turn.
As late as the 1970s there used to be a half-submerged barge at this point in the river - hopefully not the last remains of Mabel seen in our picture!
Posted by NIGEL FISHER at Tuesday, April 16, 2019

The wider part of the River is the turning circle..obviously, the place were the barges could be towed to face the opposite direction.
At the start of the C20th, the traditional wooden-built, sailing Keel, was progressively replaced by steel-built Keel, with new and existing Keel being supplemented with a steam, later a single-cylinder diesel engine.
By the late 30s, the pure sailing vessels had been converted...some with engine & sail, or engine-powered only.
It looks like that the vessel with the funnel is steam-powered; the chimney at the bow is the can't for the coal-stove in the crew's cabin - two bunks designed around the blunt curve of the bow and a simple galley.
Depending on length, Keels could carry about 40 to 50 tons.
The nearest boat also displays the hinged tabernacle and the windless for lowering and raising the mast.