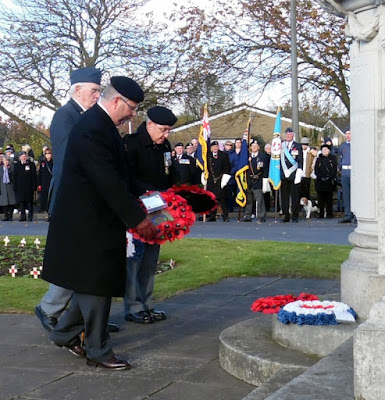 Brigg can be proud of the dignified and respectful way in which it remembers The Fallen each Remembrance Sunday in November. This has been the case for many decades.
At its latest meeting, Brigg Town Council, which oversees the organisation of the parade, service and wreath-laying, considered the timing of the Remembrance Service 2018.
That followed some criticism on "new media" of Brigg's 12 noon wreath-laying, rather than the 11am adopted by many communities across the UK.
Coun Mike Campion stressed that record numbers of people now attended at the Monument. He  was not opposed to changing the time if local British Legion veterans were happy with an alteration being made.
Coun Carl Sherwood did not think too much should be read into the comments on Facebook or Twitter but he felt there was a definite need to give the matter careful thought, taking into account the opinions of "concerned parties."
Coun James Truepenny said he would support the earlier time if all concerned were agreeable to it.
Coun Ann Eardley felt they could try such a change for 2018 and then review how it was received.
She also supported the return of a previous tradition - reading out the names of The Fallen on Remembrance Sunday.
Town Mayor Coun Sharon Riggall felt the Town Council should ask the British Legion's opinion at local level before making a decision.
That was what the council decided to do.
Posted by NIGEL FISHER at Friday, December 08, 2017

I fully support the 11 o'clock homage at the Monument...
I was asked recently why the timing should change from 12 o'clock, as present, as the Church Service has its own 2 minutes silence and has a memorial board.....the person was missing the vital points that the recognised timing of public homage is 11 o'clock, the church's memorial board omits the fallen of WW2 and that the 11 o'clock timing is not an argument of convenience/inconvenience...this is the formal timing of Remembrance.

I contacted the British Legion about the timing of the Brigg ceremony a few years ago because I felt it should be at 11am. The service in the church at 11am makes it exclusive, not inclusive, as not everyone wishes to attend church.

Their reply was that the timing was agreed by the local branch. This subject is not new and social media is not the only platform that concerned parties can use. Some of us are capable of contacting the organisations involved directly but it is pleasing to see that at last the matter is being considered seriously.

@LJF...
There has been general concern about the skewed timing for sometime.
However, the timing was imposed on the BTC, as well as any veteran group, by the Humberside Police. For decades, according to the police, the manning logistics of supervising several Remembrance Parades meant that they could only police road-closure points about Brigg post 11 o'clock.
A few weeks before the 2016's Remembrance Parade, Humberside, like other regional police forces informed the local authority including BTC, that they no longer considered such road closures as a police matter and that the authorities should seek a solution via civil Temp Road Closures notices - together with voluntary/paid manning at such traffic stop points.
The civil Temp Road Closure notices allow a road to be closed for 'x' designated minutes.
I know, for example, volunteers from local Rotary Club manned strategic points this year.
Now that the governing/enforcing factor (police logistics) affecting timings for Brigg Remembrance Sunday no longer exist, requests to BTC have argued that the timings should revert to the Nationally recognised timings of public homage.
I agree with you LJF, while most Remembrance Parades include a church service, the church service is secondary to the Act of Homage, which should take place at a public war memorial.
While the BTC is the guardian of Brigg's War Memorial, the Royal British Legion, which emerged in 1921 out of the nation's suffrage and homage after the Great War takes precedence on Remembrance Sunday....they lead every parade and Poppy is a symbol of RBL, not BTC.
Just because it has become custom and practice to hold the public 2 minutes silence in Brigg at 12o'clock, there is now no excuse impinging on timings to continue....and, why the BTC now needs to debate such timings, I suggest is questionable; it should revert to 11o'clock automatically.

Cllr Ann Eardley's idea of reading names - this would have time implications....if names are read out, such a process will need to be undertaken in a non-traffic zone, such as the Market Place.
Personally, as 2018 is the Armitice centenary, I would like to see a flag pole erected on the Memorial roundabout and the Union Flag flown at half mast in the months proceeding Remembrance Sunday...
I would also like to see Union Flag, perhaps carried by one of the cadets/scouts, leading the parade.
Apart from the very probable re-scheduling of the Remembrance Parade timings, is the BTC planning anything special to commemorate the Armitice centenary?
As the centenary other ideas that could be included on this special date could include:
a.Reading of Great War poems - such as John McCrea's 'In Flanders Field'...
b. Community singing of WW1 and WW2 songs....