SERVED BRIGG AND HIS COUNTRY 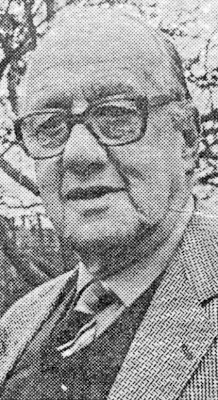 Foxton Way, off Horstead Avenue, is one of Brigg's newest streets. But it's a fair bet many residents living there today have no idea about the life of the man their street is named after.
Dr John Foxton was a well-known and long-serving Brigg GP, who retired from practice around 30 years ago but carried on for a time as medical officer to the 12 Air Defence Regiment at Kirton Lindsey.
Brought up near Hull, he became interested in the medical profession through an uncle who was a doctor, training at Leeds University, holding several 'assistantships' and volunteering to serve with the Royal Navy at the very outbreak of the Second World War.
After being demobbed in 1946 he came to Brigg to join the branch practice of Dr and Mrs Stiner, of Scunthorpe. A couple of years later he was joined by his younger brother, Dr Richard.
Many of us can remember consulting Dr John Foxton over medical matters at the surgery in Bridge Street (now a block of flats adjoining the petrol station) and at The Cedars, on Bigby Road, now being converted yet again.
Dr Foxton and his wife Thora, a Brigg bench magistrate, lived in the last large detached house on Wrawby Road, almost behind the Recreation Ground, with distinctive ivy-covered walls.
From that property today you can see across the farmer's field to Foxton Way. A bit more than a stone's throw, but perhaps readers will allow a little bit of journalistic licence!
Posted by NIGEL FISHER at Saturday, February 20, 2010

Dr Foxton was my grandfather and I have such fond memories of that house on Wrawby Road. Thank you for keeping his memory alive.