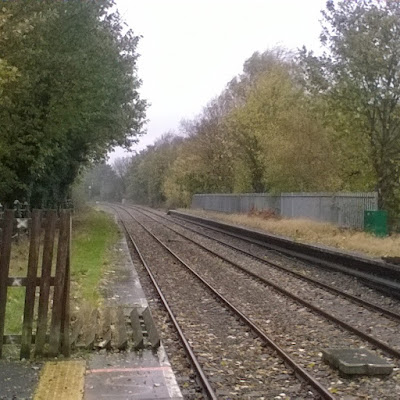 After nearly five weeks, we were delighted to see the platform lighting at Brigg station working again. A request has gone in via customer services for a bin on the Sheffield platform as there are none. Both platforms need attention, with flooding now  common.

For the 4th week in a row, rail head issues caused major problems on the Brigg Line, with very little traffic on the line during the week.
On Saturday 2H03 (0803 Sheffield to Cleethorpes) left Gainsborough Central at 0900 and struggled to achieve track speed up to Kirton In Lindsey. Extra caution was operated by the Northern Rail driver on the approach to Kirton In Lindsey station which is in an unacceptable situation for the drivers due to poor rail head conditions. Leaving Kirton station the train struggled to reach the tunnel with a maximum speed of 15 mph reached. From Kirton tunnel, again the train struggled to reach track speed.
The driver on the approached to Brigg station manged to get the train down to a crawl as the track conditions at Brigg station were awful due to leaves (pictured). Because of the lateness of the train at Brigg, the connection was missed again at Barnetby for Market Rasen and Lincoln Central. Concerns are now been raised about the new December timetable and that extra time has been added to the 0803 Sheffield to Cleethorpes, meaning the 10-minute connection at Retford for the London-bound service has been lost. An extra 3 minutes at Gainsborough Central means problems at Barnetby with a target time of 0932 needed for connections for the 0939 EMT service to Lincoln.
The issues of the rail head problems on the Brigg line have been brought to the attention of Network Rail for the last 3 years. Tree cutting has not been dealt with and locations that should have been cut down have not been.
Passenger-wise it was not to bad on the Brigg line for the time of year. However, the introduction of the advance tickets for quiet trains will be a boost for the line.

UPDATE: Paul has since contacted Brigg Blog to say: "The track inspection train is due on the Brigg Line on the 17th (today). It is  to pass Brigg around 1830, checking for faults on the track."