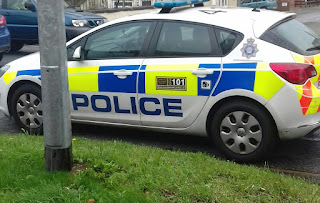 One of the shortest items at Briģg Town Council's July meeting last night proved to be one of the most interesting.
In the section where councillors report on recent meetings of other groups they have attended it was suggested that the long-running problem of drivers ignoring the 'no entry except for loading' restriction in the pedestrian area may be addressed.
It appears the Brigg & Wolds NAT - Neighbourhood Action Team - is considering the issue.
Its membership includes  police and councillors.
Brigg Blog has highlighted this issue many times over recent years and questioned why so many vehicles  are driven within the pedestrian area - and in full view of the CCTV cameras - without motorists being held to account by anyone in authority.
Shoppers are often expected to move aside for vehicles when the paved part of the town centre should be theirs alone.
As we commented to someone only the other day while discussing this topic,  some monetary penalties for offenders would work wonders in deterring other drivers from passing the no entry signs.
When NATs were established some years ago we were very surprised to learn that the the press has no automatic right to attend these sessions.
The Public Bodies (Admissions to Meetings) Act 1960 gave gentlemen and lady journalists the power to report on council, health authority and other bodies'  proceedings, later being extended  by the Local Government Act 1972.
The 1960 Act followed a suggestion by a House of Commons backbencher.
Her name? Margaret Thatcher.
If you wish to comment, please use this link
Posted by NIGEL FISHER at Tuesday, July 25, 2017