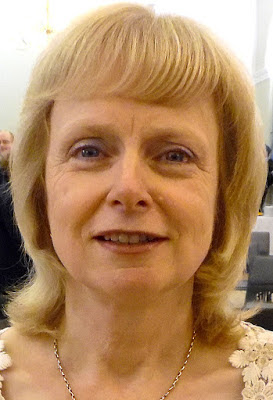 Coun Jane Kitching - pictured - could not have chosen a more apt time to raise an issue of concern to her than July's monthly meeting of Brigg Town Council.
For not one seat in the public gallery was occupied on Monday evening, supporting her belief that change is needed to get local residents to attend future council meetings.
She criticised the current  seating plan which means a number of councillors having their backs turned to people in the public gallery, when these seats are occupied.
In addition, some members of the public find that their view of the Town Mayor and others on the top table is obstructed.
Coun Jane considered it "quite rude" for elected representatives to have their backs turned to the public.
Prime Minister Margaret Thatcher famously said "the lady's not for turning."
Coun Jane was all for turning thing around and successfully suggested that in the future the seats should be re-arranged into a U-shaped configuration.
This will mean no councillors have their backs turned to the public and that local residents attending will have a clear view of the top table, from which Town Mayor Coun Sharon Riggall chairs the monthly council meetings.
Coun Jane said she hoped this might encourage more members of the public to attend.
Some concerns were also expressed about the accoustics in the sizeable main room of the Angel Suite.
Coun James Truepenny felt use of a microphone should be re-introduced, while Coun Rob Waltham said the "hearing loop" system needed to be upgraded.
The council agreed to try the U-shaped seating plan.
■ Brigg Blog was  pleasantly surprised to find the press seating re-positioned on Monday night, putting us at the end of the top table and next to Deputy Town Mayor Coun Donald Campbell. Having attended Brigg Town Council meetings since 1980, it was the first time we had enjoyed such a prime position!