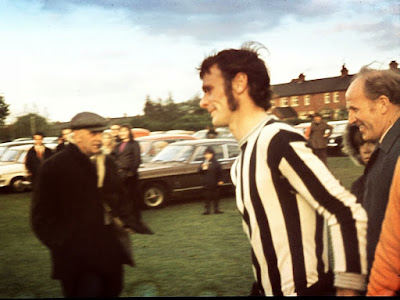 Brigg Town FC host a Grimsby Town XI at the Hawthorns tonight, Wednesday, July 19, kicking off at 7.30pm.
This forms part of the pre-season build-up for both historic clubs as they get set for the new campaign in their respective leagues.
Admission is £4 for adults - concessions £2.
We recall watching a number of pre-season matches between the Zebras and the Mariners in the 1960s, illustrating that this is a long-standing arrangement between clubs formed in the 1860s and 1870s respectively.
Grimsby won one of those matches in the late 1960s by a very wide margin, mainly due to the playmaking talents of Doug Collins.
The Mariners later sold him to top-flight Burnley.
On another occasion at the Hawthorns we recall joining the queue of young fans keen to get the autograph of Grimsby Town keeper Charlie Wright.
That was after the game when the Hawthorns still had wooden changing rooms.
Charlie has a unique claim to football fame in terms of Lincolnshire clubs as an international - for Hong Kong!
We think Charlie's appearance at Brigg must have been in 1965 or 1966, prior to his sale to Charlton Athletic.
Later, Grimsby' legendary striker Matt Tees was also sold to the London club.
He made a number of appearances at the Hawthorns.
Our dad Coun Ken Fisher - a fan of the Mariners since their glory days pre-war in the old First Division - took this picture of the Mariners' master at Brigg.
Posted by NIGEL FISHER at Wednesday, July 19, 2017