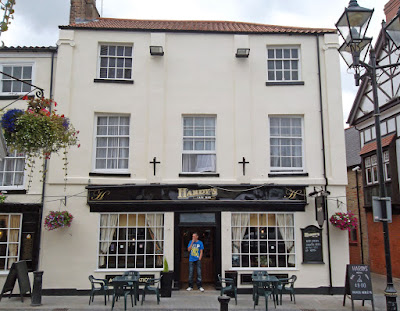 The Lord Nelson originally opened down butchery [Elwes Street] where the millennium Green is now. It was a farmhouse and part of the building was made into a pub in the early part of the 19th century.
The Lord Nelson Inn, as it was known then, had an attractive bow window fronting the street, the extensive accommodation in the farmhouse was used to cater for working class boarders with meals been provided.
William and Hannah Rowbottom ran the farm and pub from 1856-1890. Mr Rowbottom was a highly respected businessman in the town; he described himself as a farmer with 70 acres of land, a painter and victualleur.
He died in 1890 and the farm was passed onto his wife and one of his sons carried on the decorating business, but the licence was transferred by Mr F.R.Sutton of Sutton Bean Brewery to the pub's present location in Bigby Street/Market Place.
The site in Elwes Street became Sumpter's farm and yard and for many years remained as this until Mr Sumpter passed away and then the property became derelict, finally knocked down and the site cleared making way for the Millennium Green.
The Lord Nelson belonged to The Brittania Brewery [Sutton and Bean] in Wrawby Street. When this closed in December 1924, The Lord Nelson was sold to Wards Brewery of Sheffield.
It became a free house during the 1940s and 1950s. At that time it was owned by Jack Proctor, a very rich man who owned a Grimsby fish business and The Shades Pub at Spilsby. The Lord nelson was something of a hobby for him. He had a chauffeur-driven Rolls-Royce car. In 1948 his racehorse Sheila"s Cottage won the Grand National; the horse was trained at Middleham,  North Yorkshire, by Neville Crump and was ridden by jockey Arthur Thompson and won at very long odds. Mr Proctor sent £5 to every pub in Brigg to buy beer for their customers, which would buy a lot in the 1940s. It was said somebody pinched the lid off the gold replica Grand National Trophy which was on display in the pub.
Mr Proctor also had another racehorse, Keepatwoatwo,  which at one time held the course record for 6 furlongs at Nottingham. The name came from the advice to domino players to keep a two a two.
In the 1960s it became brewery owned again and a succession of landlords followed over the next two decades.
In the 1980s the former Lacey and Clarks shop, which was Binns for a while,  was incorporated into the Lord Nelson, becoming Styles and then The Jolly Roger.
In the 1990s a complete refurbishment of the whole of the two buildings took place by The Old Mill Brewery of Snaith.
Now the building next door has been aptly named Hardy's (pictured above).
Hope this answers a few questions.
Almost forgot... the bow window taken out of the The Lord Nelson Inn from Elwes Street was given to Scunthorpe Museum in the 1920s.
Posted by NIGEL FISHER at Monday, September 12, 2016

When I first arrived in Brigg in 1981, there was an already story that there was tunnel in the Lord Nelson leading to the extinct Newstead Priory.
The legend didn't really feel very convincing, but a number of folk believed in the story.
Firstly, the Gilbertines of Newstead were an open order..both men and women and it had lay-monks who lived outside the priory...so was was there a need for a secretative, long, dark tunnel.
Secondly, Newstead Priory, at that time was on Ruckholm..an island in the middle of the braided river system of the Ancholme.
When they built the new rowing club house only a few years ago, construction involved piling some 12 metres down (35 feet) thro' veggie mold and wet clays to find a suitable foundation level...thus a tunnel in both Newstead and the Nelson would have to be entered by a very deep mineshaft....and a very probable very wet tunnel that would need constant pumping out to avoid flooding
Thirdly..and the clincher to discredit the story of a tunnel is the fact that Newstead Priory was demolished in the C16th, the original Lord Nelson didn't start trading until the start of the C19th..a time gap of about 250 years..
But some folks will still believe the story of the monks' tunnel in the pub.....its probability enhanced and people's susceptibilites increased after a few pints of beer...