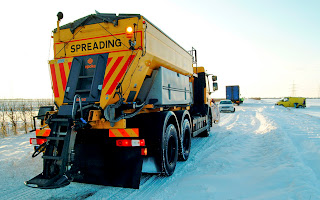 Gritting lorries from Lincolnshire County Council will again be crossing the border and doing a spot of spreading in Brigg and district this winter.
The Lincolnshire authority has just released its routes for cold weather work during autumn/winter 2012/13.
And the map www.lincolnshire.gov.uk/grittingroutes shows gritters from the adjoining county will work along the A1084 into the Brigg area covered by neighbouring North Lincolnshire Council.
There will be no U-turn made at Brigg Garden Centre, on the county border.
Meanwhile, in North Lincolnshire, highways are the responsibility of Brigg and Wolds Ward's Coun Nigel Sherwood, a member of the controlling cabinet that oversees the main decision-making.
North Lincolnshire's own gritting teams, as always, will be out and about making our roads safer, whenever temperatures drop near to 32F "in old money." 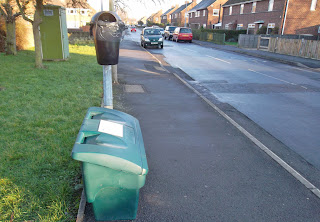 The new initiative of providing salt bins for use in North Lincolnshire towns and villages is also to continue this winter, with Brigg Town Council involved ours placed at strategic spots (such as Springbank and Churchill Avenue). And you can expect to see more of them this year.
The idea is that well-meaning members of the public can go along, help themselves to the salt and spread it where needed in their locality.
But back to Lincolnshire County Council, which has just announced its procedures for the cold snaps ahead.
This year’s gritter ‘shake down run’ is taking place over the next two weekends.
The county council’s 43 gritters will be taking to the roads for one final run through before the cold weather begins.
Executive Member for Highways and Transportation, Councillor William Webb, said: “We don’t want people to think we know something about the weather that they don’t!
"This ‘shake down run’ is something our gritter drivers do every year while the sun is still shining, to make sure their vehicles are in top condition with no further maintenance needed and also to check their gritting routes are clear.
"They always have one last run through before winter weather begins. If you do see our gritters when you’re out and about, do feel free to give the drivers a wave! They do a tremendous job, helping to keep us moving on the roads.”
A total of 15 new replacement gritters will arrive in the next fortnight – twelve 26-tonne Mercedes Schmidt vehicles and three smaller 10-tonne DAF gritters.
Just over a third of Lincolnshire's roads are salted – including all A and B roads – each gritter with its own specific route, exceeding government expectations.
The county council’s Gritter Twitter information service can be followed at @LincsCC_Winter

LINCOLNSHIRE GRITTER FACTS
There is a specific section of the council website with gritting frequently asked questions: www.lincolnshire.gov.uk/grittingfaqs
The priority gritting routes in the county can be seen online at www.lincolnshire.gov.uk/grittingroutes or call 01522 782070 for a copy of the leaflet.
Last winter, 21,000 tonnes of salt was used, with gritters taking to the roads 82 times.
The latest salt arrival of 15,000 tonnes takes the total up to 35,000 tonnes available for this winter.
A total of 34,000 tonnes was used during the exceptional winter experienced back in 2009/10.
Salt is stored across the county at the county council’s eight highways depots.
More advice about preparing for winter can be found online www.direct.gov.uk/getreadyforwinter

....There were some reports last winter that one of boxes was locked!
Can we be assured that all salt boxes will be accessible well before snow and ice are forecast?