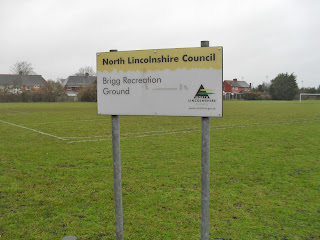 During the latest monthly meeting of Brigg Town Council there was general agreement about the Recreation Ground, off Wrawby Road, being in real need of investment to improve facilities for the future.
Just how this might be achieved was a topic raised by Coun Mike Campion, who made reference to how the owners/operators of the ground, North Lincolnshire Council, have been holding talks with sports groups in the town - although not inviting Brigg Town Council to take part, he suggested.
Coun Campion asked a question about whether consideration was to be given to selling off some land at the ground for housing.
"Can we ask for an update?" said Coun Campion - three  members of the controlling Cabinet of top councillors for North Lincolnshire being present at the town council's monthly meeting in the Angel Suite; Couns Carl Sherwood, Nigel Sherwood and Rob Waltham.
Coun Carl explained that officials within North Lincolnshire Council had been asked to draw up various options, with a meeting "to band round ideas."
The intention was to form a committee to look to the future. But funding would be required.
Coun Waltham pointed out that Brigg Recreation Ground is not designated for housing.
Clearly, a lot needed to be done to the ground as it is, but he felt the current situation should be viewed as a "visioning opportunity."
He added: "For too long it has been under-invested."
Coun Waltham pointed out what he saw as a sad fact of sporting life: Too many teams from Brigg - including hockey -  have to venture out of town to play their home games.

NF adds: After the Second World War, forward-looking Brigg Urban District Council acquired agricultural land to be transformed into the Recreation Ground. Many older Brigg Blog followers will remember the old farmhouse (used by the council groundsman) and its adjoining range of farm buildings, fashioned into rudimentary changing rooms. When the UDC disappeared during local government re-organisation in the 1970s, Brigg decided it did not want to run the Rec at town level, so it passed  into the control of the newly-formed Glanford Borough Council, serving a large district from Burringham and Barrow to Kirton and Barton. Further local government changes in 1996 moved Brigg Rec into the ownership of a unitary authority, North Lincolnshire Council.
We can't turn back time: But what would the Recreation Ground be like today if, in 1973/4, it had been retained by Brigg?
Posted by NIGEL FISHER at Friday, October 26, 2012