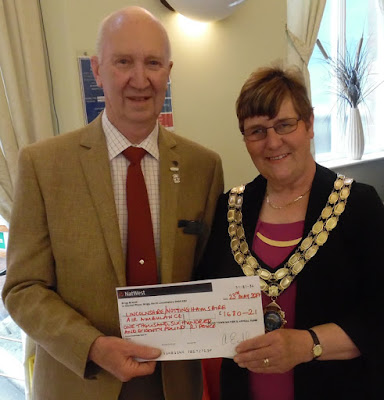 A very impressive £5,000+ was raised for worthy causes by Brigg Town Mayor Coun Ann Eardley during her 12 months in office.
On her final day as first citizen she announced her appeal fund's grand total, thanked those who helped collect donations and presented cheques to the beneficiaries.
The total raised came to £5,046.
Cheques for £1,680 went to the local LIVES first responders, the Air Ambulance - SEE PICTURE ABOVE OF THE MAYOR WITH TREVOR CHERRY - and the Royal Artillery Association, SEE PICTURE BELOW - a charity supporting Forces' veterans and their families.
Coun Eardley thanked the general public for supporting her appeal, which included tombolas on a stand in the town centre.

In her final address as Town Mayor she told the Town Council's annual meeting that she had been proud to undertake the role and represent the authority at many events and functions.
She had some lovely memories of her 12 months in office.
Looking to the future she anticipated a new store being built in Brigg by Aldi later this year.
She also expressed a wish that a National Lottery funding application would be submitted to provide Brigg Horse Fair sculptures.
Representatives of the three worthy causes thanked Coun Eardley after being presented with the cheques.
The money will be put to good use.