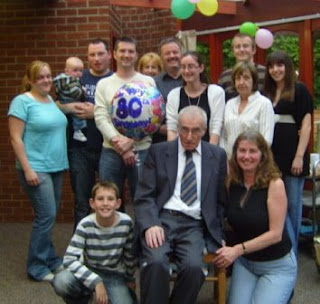 Very well-known in Brigg, Albert Chudley celebrated his 80th birthday as a resident of Norwood House home, and his family have penned a tribute to him and the care he is receiving.
Albert shares his birthday with his eldest son Melvyn and son-in-law Brian (missing from the photo due to work commitments).
Albert has been a resident at Norwood House since April 2007. On the advice of Social Services, his family looked at, and visited, several homes in the area to find a suitable one and after visiting Norwood House they felt they needed look no further. Without having to make an appointment they were welcomed and shown around the premises. The carer who showed them round (Dawn) gave Albert as much cheek as he tried to give her, and Albert has been happy there ever since.
The family said: "He suffers with Parkinson’s Disease, yet all his medical needs are catered for from medication, hospital, dental, eye and doctor’s appointments which means the family do not have to worry.
"The home allowed the full use of the conservatory for the party and they also provided us with a very nice buffet. Albert’s family feel that their father could not be looked after any better and would recommend the home to anyone looking for themselves or for a senior member of their family."
Posted by NIGEL FISHER at Thursday, September 04, 2008