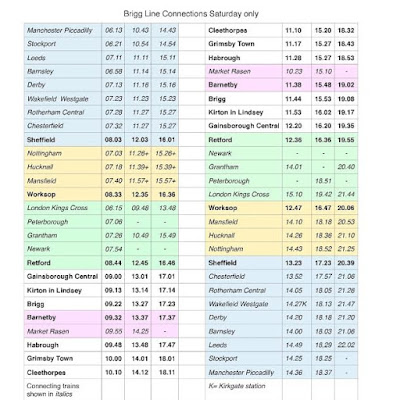 REPORT BY PAUL JOHNSON, FRIENDS OF THE BRIGG & LINCOLN LINES

A future meeting is planned with the three local Brigg councillors to forward plans for a footpath from the end of Station Road to the station front.
Sadly, North Lincolnshire Council's highways department refused again to grit Station Road and up to the station as it did not fit their criteria. This regrettably backfired on Saturday morning as the whole of the road and station area was full of ice.
There is still a large amount of flytipping in the area near the  coal drops. This was reported 6 weeks ago and another e-mail has been sent out to remove this as customers on the train arriving in Brigg can see it and it does not give a good impression of the town.
Sadly, on Saturday the platform lights failed again but this issue has been reported to Northern.

Route and Service
After been closed for a number of weeks due to the Northern Lincolnshire resignalling scheme, the Brigg Line was fully reopen again
As per normal the 0803 Sheffield Midland to Cleethorpes via Brigg was very popular for customers travelling to Retford Low Level for connections to Retford High Level for the 0852 service to London Kings Cross.
Kirton In Lindsey again surprised us on Saturday with around 7 passengers using the station in the day.
Customer numbers generally were very good for the time of year. However, the first reports have already come in via the LINK 1 Sheffield guards of a pair of customers asking for the Duo Ticket on the Brigg Line and sadly been refused.
The 1601 Sheffield Midland to Cleethorpes / 1832 Cleethorpes to Sheffield Midland service was run by a class 150 unit rather than our bouncy railbus friend; this was very popular from all that travelled on her.
The Gainsborough Rail and Bus Group have kindly designed a timetable format that will be going in all of the posterboards this week (pictured). The timetable shows how to get onto the Brigg line each Saturday from different areas and the connections needed.
We like to thank Northern for delivering 2 boxes of the A4 timetables. These will be distributed this week and I'm sure will go like hot cakes.
We would also like to thank Dean Lancaster, from First Trans Pennine Express, and Marion Thomas, from West Lindsey District Council, for printing the A3 Brigg Line timetables so we have something for our posterboards.