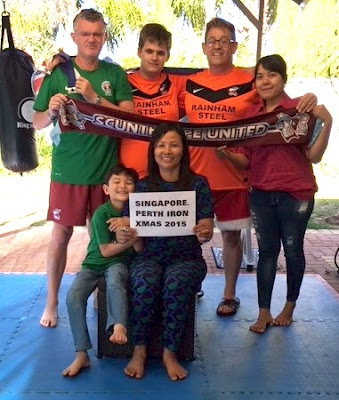 Former Brigg school chums Simon Church and Chris Jacklin  were reunited in Perth, Australia, over Christmas.
Simon’s family were hosts for a visit by the Jacklins.
School-wise Chris and Simon are  not-so-old  Briggensians and also played cricket for Brigg
Simon and Chris “catch up” often, despite Chris and his wife Ria now being based in Singapore.
Recently, they were in touch on ‘Facetime’, just as Chris was about to meet and greet another former cricketer and Brigg schoolmate, Paul Jenkinson.
Chris and Paul were planning to  watch the Chelsea v Scunthorpe FA Cup clash on TV – in  Clarke Quay, Singapore. It’s a small world, as the saying goes.
FRIENDS & FAMILY:  Our  picture features Chris Jacklin, left, and Simon Church, second right.
Posted by NIGEL FISHER at Sunday, January 17, 2016