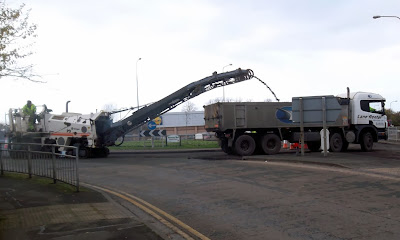 Re-surfacing work on the A18 at the roundabout near the Tesco and Lidl stores in Brigg caused long tailbacks of traffic and delays for drivers today (Sunday, November 24)
North Lincolnshire Council gave notice that the work was coming up, but vehicles were queuing along Barnard Avenue, past the Monument and down Bigby Road - the A1084 - as far as the car lot near the level crossing.
Having been to Tesco by car to use the bottle bank and nip in the store for a couple of items we wondered how we were going to comply with the no right turn instruction, as it was impossible to go left and use the roundabout, due to the roadworks.
However, someone connected with the work had clearly thought ahead and the no right turn instruction was not in force today. So getting out of Tesco and onto the A18 was actually quicker than usual! 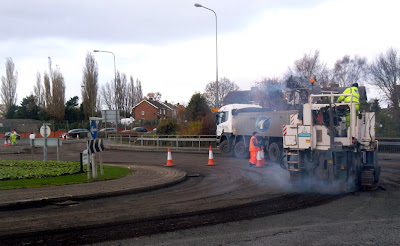 Us brainier ones went down Carey Lane and parked in the old Lidl's car-park....dead clever, eh!

But I thought someone said that the resurfacing would only take ONE day...At 4pm the contractors had only removed the old surface and the team had disappeared - even the temp traffic lights had gone.

So unless a resurfacing team appears and works throughout the night.....I can see an even more bigger mess tomorrow....

Alternatively, the tarmacking team could come back next Sunday - but ONE + ONE = 2......in which case Tesco should be informed so they can divert customers down Carey Lane to the ex-Lidl's car park - this helps a lot, particularly if travelling from the Monument area.

Throw a big sheet over the surface-remover with the long conveyor belt as seen in the first picture, we could can have own Diplodocus dinosaur.

Any idea why I didn't say, 'Brotosaurus', Nige?